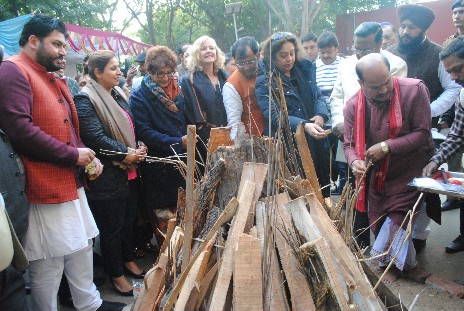 Mrs. Angelina mayor and Ms. Pinki from Australia were special guests during the function.

The function started with lighting of the “Lohri bonfire” followed by a cultural programme by women staffers of Municipal Corporation of traditional Punjabi touch. Gidha and Bhangra were also performed by the employees of MC. The theme of the Lohri celebration was “Beti Bachao, Beti Padhao”.

Sh. Davesh Moudgil, Mayor of Chandigarh extended his greetings to the employees of MC and people of Chandigarh on the occasion of Lohri and Makar Sankranti. He described these festivals as harbingers of peace, progress and prosperity. He said that the festival as a part of composite cultural heritage which strengthens the communal harmony and cultural fabric of the country. Such festivals should be celebrated with zeal and traditional fervor, he added.