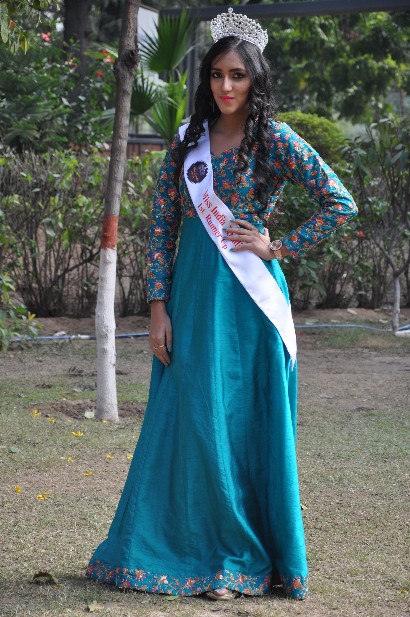 Local girl Gurleen Madhok, Second  year student of Bachelor of Pharmacy in Chitkara University, has done tricity proud. She has bagged  two  coveted  titles- First  Runner  Up & Beauty  with  Purpose  at a National level, first of its kind Beauty Pageant, based on Khadi theme- Miss India Khadi. The grand finale of the beauty contest has been held recently at Hotel Taj Palace in New  Delhi. It is pertinent to mention that the event was organized by Ministry of Micro, Small & Medium Enterprises (MSME) &  Khadi  Board  under  Prime Minister Narendra Modi’s Khadi Mission – ” Khadi for Nation- Khadi for Fashion” which is aimed at popularizing India’s hand-made fabric Khadi as a fashion statement.

Gurleen looked stunning in the Khadi attire and made an impact with her studded crown while interacting with media to share her experiences about the journey of this pageant. It is noteworthy that, Chandigarh’s well known  professional advertising and modeling agency SMC BIZZ headed by renowned fashion photographer, grooming expert and pageant director Sunil Bansal has trained Gurleen for this pageant.

Gurleen’s achievement bears significance as nearly  80,000  contestants from  more than 200  universities  across  22   states  in  country had competed for the title.  Gurleen was among  the  top  25  participants  selected for  grand  finale. The  event  started  in  July, 2017  with  auditions  in  various  universities and Chitkara University was also one of the Venue, where in over 100 students of Chitkara University participated & out of them few were selected as state finalist. Introduction & question answer round were taken for evaluation of contestants followed by state level competitions and Grand Finale in New Delhi. A number of eminent personalities  including Mr. Akhilesh Mishra, IAS, CEO Khadi Board, Her Excellency Rani Rukshmani from Royal Family of Jaipur, Ms. Koyal Rana, Miss India 2014 , Mr. Ankush Anami, CEO of Miss India Khadi graced  the  grand finale with  their  presence.

Along  with  the  promotion  of  Khadi, all  the  participants  were  given  tasks on  social  causes  which  later  on  served  as  the  criterion  for  evaluation   of  the  winner. “After  winning  the  state  level  finale  as  Miss  India  Himachal  state  winner , I was called  for  the  grand finale.” Explained Gurleen. Out  of  all  the  titles,  the  one  which  attracted  most  attention  was  ‘Beauty  with  Purpose’. Gurleen  was  awarded  this  title  for  her  effort  to  spread  awareness  among  young  girls  against  sexual  harassment. Gurleen with  the  help  of  her  few college  friends  made  a  7  minute  short  video  on  sexual  harassment. Gurleen also held a preview of the video for media. The  video  which consists  of  two  parts, presented  on a  situation  in  which  a girl  is  sexually  harassed in first part and the second part carried a message by Gurleen. Ms. Madhok emphasized on the issue by taking into consideration sexual harassment done in a girl’s own home and requested the community to educate girls about the same. Talking  about  the  video  on  sexual  harassment, Gurleen said  “I was  aware  of  tremendous  increase  in  sexual  harassment  specially  among  young  girls  of  age  8-10  years  and  hence  chose  this  issue.”

Taking  into  account  the  huge  success  of  the  event  and  in  order  to   inspire  the  youth  towards ‘ Khadi for Nation to Khadi for Fashion’,  Gurleen  would  be  honored  by  Jai  Ram Thakur, Honorable Chief Minister  of Himachal Pradesh. A  girl  form the region reaching  to  such  a  great height  with  a  purpose  in  mind ,  is  highly  inspiriting  for  the  younger generation  and  will  go  long  way to  define  beauty  in  its  real  form.