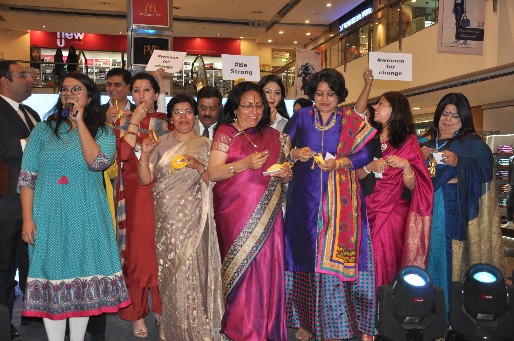 To coincide with  International Women’s Day celebrations, tricity witnessed one of the largest events across North India – “The Iron Lady Awards” which were held at the DLF City Centre Mall, in IT Park here.

These awards were organized to acknowledge and honor  the strength and sprit of  the women who have made a mark in the professional world of today, and who are educated, established and empowered.

A huge response was seen with more than 200 nominations being received from the Northern region in different categories. These nominations were further scrutinized for authenticity and on parameters like special efforts of the nominee etc. The final awardee was then selected by a jury of eminent people. In all 20 awards were given. Four awards each were given under 5 different categories. These were – inspirational young women, inspirational women(physically challenged), iron lady (educated), iron lady(empowered) and iron lady(established.)

Apart from honouring women for their dedication , determination and making a mark in life, there were some special awards given away as ‘Man of Honor’ to the men, who supported women, to grow in their professional endeavours, these included -Mr. Ajay Tewari- CEO Smart Data, Mr. A P Singh- President (Rotary Club of Chandigarh),   ADGP Mr. Ashwinder Singh Chawla, Mr. Satyapal Jain- Addl. Solicitor General of India.

To finally give away these awards along with the very respectable jury members, a good number of guests’ of honor, were also invited at the DLF Mall. All the women attendees were given special goodie bags by DLF Mall to honour all women of substance. Live RJ and VJ interactions, magical mirror and Photo booth were some of the main attractions for all the visiting ladies.

To add fun and cheer to this inspirational event, some very special performers which included the very enthusiastic Jahangeet- the Youngest Dholi, Dr. Varun- Bharatnatyam Performer along with the Musical Sensation- Gursaaz,  left the audience awestruck. Also to add more meaning to this whole event, Prasanchetas Foundation, with the support of DLF City Centre Mall and Kidzee launched their child and women safety kit. In continuation of the same, a song with the theme  of ‘mission pad girls’ of Prasanchetas Foundation, under which the foundation is working to spread the awareness and sensitivity on menstrual hygiene along with overcoming of various related stereotypes, was showcased in form of a dance performance highlighting the ‘himmat’ of the 21st century women.