Body shaming is not something I have experienced in my adulthood; it has followed me from the beginning. I was a fat child, a fat teenager and now a fat Adult. I have no problem with that nor do my close ones make me feel different. But this society has always made me feel somewhat different from them. I have seen this from my childhood that I am taken as someone who doesn’t fit in.
I was always rejected just because I look big from them. They rejected to make me their friend, they rejected to hang out with me, and they rejected to love me. What worse? They laughed at me for being fat and gave a look as if I have done some type of crime. And this has happened from my childhood only. No one cared how much it was affecting my mental level. I started feeling conscious about myself and my looks, even at times I used to hate myself.
It was even impossible to go out as people used to stare at me and make fun of me. Even going to high school was a big task as I wasn’t the girl of anyone’s dreams and no boy wanted to even see me. And girls were already busy with their Boyfriends, had no time to make a fat friend like me. Most of the time I decided to stay at home only. But obviously there came a time when I had to go out for work. I had no other chance. I went for work hesitating about my looks. I was just a simple girl at that time who had no idea of Fashion, trends and Makeup. I will blame society for this as they never let me feel good about myself that I go out and get the knowledge of things happening in the world.
Work environment was something different. But going to work, crossing those roads, people staring at you from morning time only, made me more insecure. I used to cry alone at night thinking why I can’t be treated as a normal person. I too had crushes at school and college but never got enough confidence to even talk to them once. I knew I will get rejected only.
And one day I got a boy who was ready to be my boyfriend but first thing he wanted to tell me was that He can’t marry me. The reason obviously shocked me as His mom won’t accept a “Fat Bahu”. Also we will have to keep our relationship secret as He doesn’t want to tell anybody. The reason was obvious. He didn’t want to get embarrassed in front of his friends that his Girlfriend is a Fat girl. The question I asked him was then why are you ready to make me your girlfriend? He answered that he himself has no problem with my looks. Bloody hypocrites seriously…..
And this was not the case with him only. This was the incident of me being 19 years old and I am 24 year old now. I have been through so many same incidents and all of them saying the same thing to me. Even I got many married men attracted to me for just using me for their needs. Each time I asked myself why can’t anybody love me for what I am, for how I actually look. 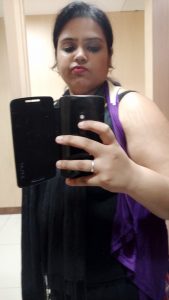 This never ended and keeps on happening even now also. I became so scared that I started lying to people about my looks and used to post only my face photographs on Social Media. But now this wasn’t society denying me, I started denying my own self. And when I realized it, it was actually too late as my mind wasn’t ready to accept this. It took me a lot of time and efforts to love myself again for what I am and God has made me. So many advices came like go to gym, start dieting, don’t eat Junk food, do yoga and so on. But no one was actually ready to accept me as I am. They all wanted to change me and then love me, even as a Friend also. I found girls more worse than boys. They make you feel inferior from them because you can’t wear what you wish to just like them.
Obviously this had to end somewhere, not from the society but from my own self. When I decided not to listen to anybody’s crap and not to adjust in life, their opinion of my looks never mattered again. And now I love the way I look. I am bigger than many other girls. I eat what I want and at any time of the day. I never go to gym and I am never on diet. Also, I will not change myself for anyone. Accept the Fat me and then If I ever wish to…. I will see if I myself want to get slim or not. I love the Curvy me, the fat all over my body that makes me more Cuter than most of the skinny girls.

Beauty comes in all shapes and sizes