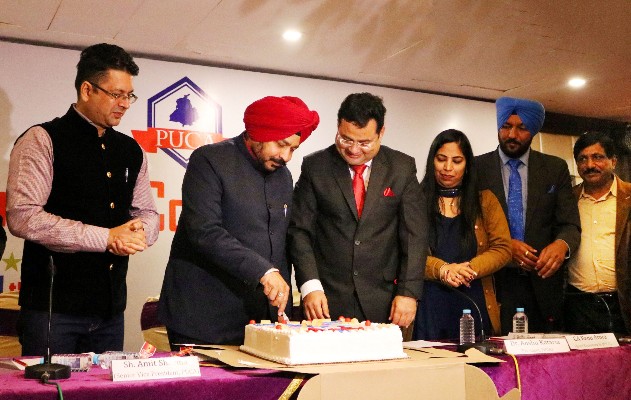 “Punjab Unaided Colleges Association (PUCA) has played a major role to raise the standard of Education in the Unaided Colleges of Punjab and to resolve the problems being faced by the Unaided Colleges by bridging the gap between the Students, Parents, Staff, Management and the Government”. This was said by S. Sadhu Sigh Dharamsot, Minister for Social Welfare, Punjab on the 4th Foundation of PUCA. Dr. Anshu Kataria, President, PUCA presided over the function. Apart from PUCA, Directors of 12 more associations of JAC were also present on the occasion.

Dharamsot also launched the new website made by PUCA i.e pucapunjab.com. This portal would carry all the relevant information related to the colleges and the affiliating Universities of Punjab to help the students in seeking the admissions.

Dharamsot while speaking on the occasion said that the previous Govt remained unfair with over 3 lakh SC Students of more than 1600 Colleges of Punjab over the Post Matric Scholarship (PMS) funds. But as soon as this Govt. took the charge not only they have got the audits done but also solved the funds for drop out cases.

Dharamsot further said that due to one or other reason, Centre Govt was delaying the payment but with the regular follow-ups from State, Centre Govt has release 323 Crore and 284 Crore of PMS. Moreover, State has also contributed its own share into it.

Jayesh Singla of Allen grabs All India Rank 10 in KVPY...