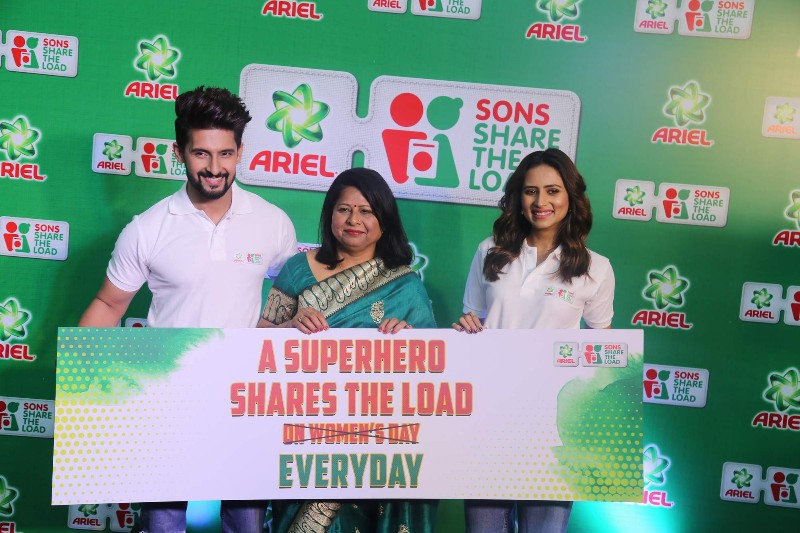 Chandigarh
9 March 2019
DIVYA AZAD
Ariel- the leading detergent brand from P&G partnered with PVR to host a special screening of the movie- Captain Marvel. Ariel’s latest campaign Sons #ShareTheLoad emphasizes on the need for sons to #ShareTheLoad when it comes to household chores. This partnership encourages all men (sons and husbands) to treat their Supermoms and Superwives to a superhero movie- Captain Marvel, because they will #ShareTheLoad and do  household tasks together. Captain Marvel is a 2019 female superhero film based on the Marvel Comics character Carol Danvers.
Popular television actors and real-life couple – Ravi Dubey, Sargun Mehta emphasized on the needfor gender parity in a relationship and having an equal household.
Ariel has been unearthing the reality of inequality within households since 2015 with their award-winning movement #ShareTheLoad.Ravi and Sargun brought forth insightful conversations and personal anecdotes on the disparity within households and changing times today. They highlighted that while more men today are sharing the load than ever before, we are still many steps further from the ideal state of an equal future.
The newly-released edition of #ShareTheLoad raises yet another pertinent question in the direction of household inequality – Are we teaching our sons what we are teaching our daughters? The film that urges mothers of today’s generation to raise a generation of equals has resonated with many parents, newly married couples, influencers and has already received tremendous support and commendation from audiences across India.

IMG COMES UP WITH REALITY BASED WEB SERIES –  ‘SURVIVORSS’