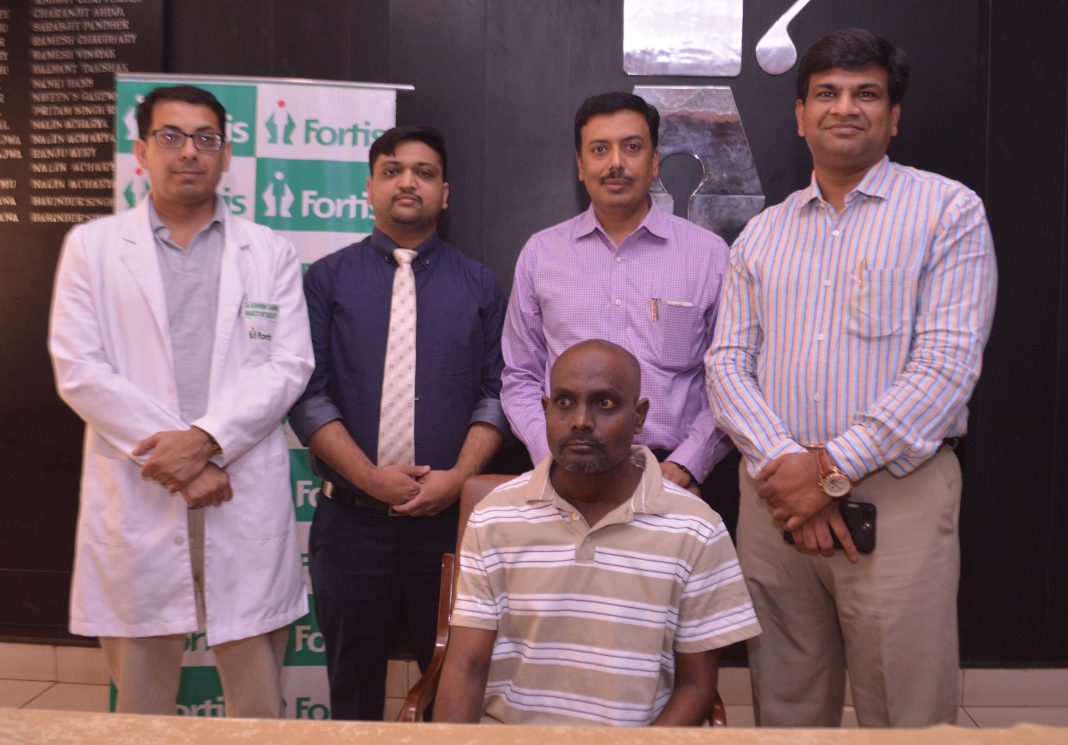 Ashok Kumar Mandal, a 41-year-old teacher in a village in Jharkhand, did not know what misfortune was in store for him when he started having fever around January 2017. He had urinary complaints as well and got initial treatment at Jharkhand and then at a Kolkata hospital, where he underwent a urological intervention.

Further investigations in Kolkata revealed that he had a left Parathyroid adenoma (parathyroid tumour) which was secreting parathyroid hormone, in turn increasing his calcium levels in blood to alarming levels. This led to multiple huge stones in both kidneys and severe urinary tract infection (UTI).

He was referred to Chandigarh for further management and he got admitted to Fortis Hospital, Mohali under Dr Vishal Bhambri, Senior Consultant, Internal Medicine, on February 22.

Mr Mandal’s fever refused to come down and he was diagnosed with XDR (Extremely drug resistant) bacterial infection (Klebsiella) in urine. He was given a combination of strong antibiotics for his severe infection and his fever resolved. Meanwhile, his calcium levels were normalized with Dr R Muralidharan’s help (Senior Consultant, Endocrinologist, Fortis Hospital, Mohali). He was taken up for surgery by Dr. Naval Bansal (Consultant, Endocrine Surgeon, Fortis Hospital, Mohali) who operated upon him successfully and found that there was a thrombus (clot) in parathyroid draining vein as well (of which very few reported cases in the world are there so far).

The patient was also taken up for urology intervention (Bilateral PCN) by Dr. Priyadarshi Ranjan (Senior Urologist & Renal Transplant Surgeon, Fortis Hospital, Mohali) on March 3. The infection level in his kidneys was so high that it was felt by the Urologist to wait for it to settle down before undertaking a definitive stone surgery. So he was discharged from hospital on March 10.

He was admitted for the second time on March 25 and Dr. Ranjan undertook a major urological procedure to open up his urinary system. His infection level was so high that he went into septic shock with multi-organ failure after this surgery and his condition deteriorated ever further. He developed deep jaundice and was on multiple medicines to maintain B.P. at one time along with being on ventilator.

“Good ICU support, teamwork & prayers brought him back from the brink of death to life,” said Dr Bhambri. The patient’s infection in blood and urine turned out to be resistant to all antibiotics. Despite this, he was treated well and got discharged on April 12 on patient’s request.

He required a third admission on April 14 with recurrence of fever. His blood culture showed another very resistant infection (VRE). Dr Bhambri said, “This was again managed well and he got discharged on April 20.”

The patient, grateful to his doctors for their efforts, said he was thankful that all specialists were available to take care of all the complications. “I am returning to Jharkhand as a man who has been gifted life by these doctors,” he smiled.

You’re Depressed?? The ring will let you know!