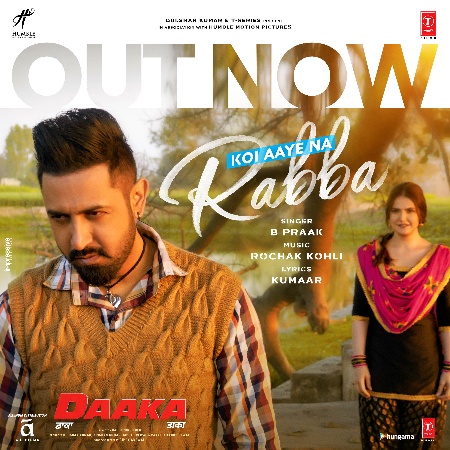 Gulshan Kumar & T- Series, in association with Humble Motion Pictures is all set to release their upcoming Punjabi film ‘Daaka’. On Monday, the makers of the film released the romantic track of the film ‘Koi Aaye Na Rabba’.

One of the finest artists of the industry, B Praak has sung the song; the lyrics are penned by Kumaar. Rochak Kohli has given the music, and has also composed the music.

Singer B Praak said, ‘Koi Aaye Na Rabba’ is a song which literally touches the chords of the hearts of the audience. The song has that element which literally moves the audience to tears, and has full feels of the emotions. I have tried our best to do justice to the song, and hope that the masses like it as much as I have liked it. I have seen the trailer of the film which is amazing. I wish all the best to the whole team for the release of the ‘Daaka’.”

The story and screenplay of the film is written by Gippy Grewal. Daaka is produced by Bhushan Kumar, Krishan Kumar, Gippy Grewal and Ravneet Kaur Grewal. Jatinder Shah, Aditya Dev, Jay K and Rochak Kohli are music directors of the film. Vinod Bhanushali and Vinod Aswal are the co-producers of ‘Daaka’.

This film is a full suspense thrill which will surely keep the audiences hooked to their seats and twists and turns in the tale will make it a worth watch.

The song has already been released on the official YouTube channel of T-Series. ‘T-Series’ presentation ‘Daaka’ will hit the theatres on 1st November 2019.