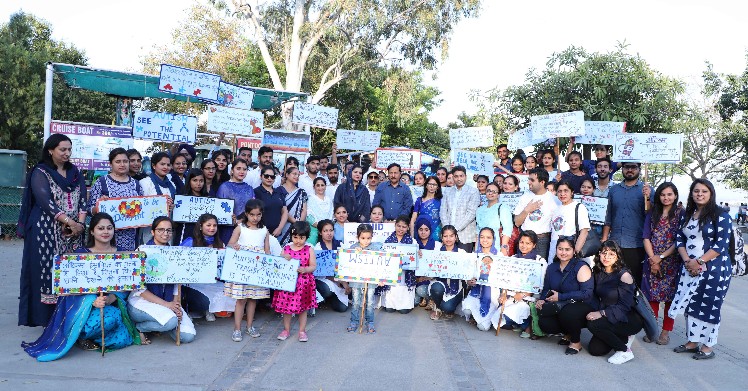 On the occasion of World Autism Awareness Day, GRIID, organised a series of programs which included Workshop for Aanganwadi workers, Slogan writing competition, and a play at Sukhna Lake concerning the awareness towards individuals with Autism.

Slogan writing competition on creating awareness for Autism was conducted at GRIID. The competition was conducted in three different languages i.e. Hindi, English & Punjabi with first, second & third places each. The prize amount for the 1st, 2nd & 3rd were 1000/-, 750/- & 500/- respectively. All the slogans were displayed at Sukhna Lake at 5:30 pm. The main objective was to make people about Autism. The Certificate and prizes were distributed to the winners.

There were all 92 students of D. Ed., B. Ed., and M. Ed. of GRIID and students of M. Phil. (PSW & CP) and MD participated in this competition. The competition was held in three different languages which was judged/evaluated by a team (Dr. Gurvinder Singh, Dr. Shivangi Mehta, Ms Nazli & Dr. Wasim Ahmad) lead by Prof. Priti Arun.

A workshop for the Anganwadi workers was also organised. In this workshop 100 Anganwadi workers participated. The resource persons who spoke during the workshop were Prof. BS Chavan (DP-GMCH), Dr. PritiArun (JD-GRIID), Dr. Shivangi Mehta, Dr Wasim Ahmed, Assistant Professor GRIID,  Dr Archana from the Dept of Psychiatry, GMCH and Dr. Deepti Raina (Child Specialist-GRIID). During this workshop these Anganwadi workers were trained about core features of autism viz. social behaviour, communication and restricted repetitive behavior. They were sensitised on how to screen, and identify children with Autism at early age using Chandigarh Autism Screening Instrument (CASI). This tool was developed by Dr. Priti Arun and Prof. Chavan to identify and screen children with Autism at early age by health workers.

The workshop was beneficial for Anganwari workers as they play an important role in early identification of children with autism and their sensitisation towards autistic children is of utmost importance.

An awareness rally with different slogans written by the GRIID college students were displayed at Sukhna lake for creating awareness in the public. A street play was also organised by them with a theme to understand challenges, limitations and strength of children with Autism. This short skit tried to depict the myths attached with autism as well as the importance of parent professional partnership in the growth and development of children with autism. This skit was written by Dr Nazli, Course Coordinator.

Prof. Chavan spoke about Autism is a disability which is generally not taken seriously. Many a time it goes undetected due to scarcity of trained manpower he said.