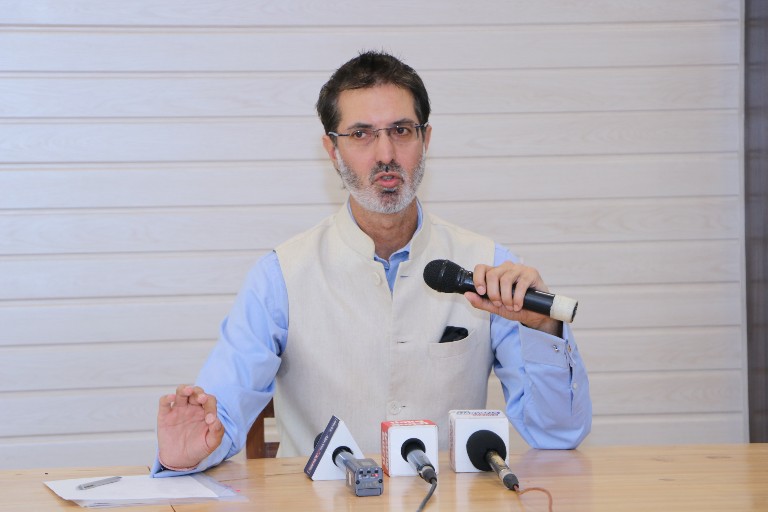 The Indian subsidiary of an American multinational Hughes Communications India Ltd. (HUGHES) has come under fire for serious non-compoundable violations of the building plan and other bylaws at its corporate head office in Gurgaon.

The owner of the land, Imran Baig, has now taken up the matter with Manohar Lal Khattar, the Haryana Chief Minister, citing a recent High Court Judgment in the same matter which alleges corruption on the part of the Govt Authorities – asking how permissions were acquired from the Municipal Corporation Gurgaon and the Haryana Urban Development Authority (HUDA).

The Chief Administrator HUDA as well as the Estate Officer HUDA have said in written orders that Hughes made illegal payments to procure permissions. Yet no action has been taken.

The Municipal Commissioner has submitted a written Order in the High Court saying that the building is running without an OC and Fire NOC and that thousands of lives are in danger – to the persons working in the Building and also the many adjoining Buildings like Maruti Udyog.

As far back as 2013, The Municipal Commissioner has sought immediate sealing of the building which happens to be on the brink of a major fire tragedy yet no action has been taken.

As per Govt Investigations and given in writing by the Chief Fire Safety Officer Gurgaon – The Lease of the building expired in June 2011 and the company has been illegally ‘squatting’ on the land. This has been further confirmed by the bonafide Owner of the property and supported by inspection of conveyance deed in the HUDA office.

In his letter to the CM the owner expressed serious concern overviolations that threaten the lives of thousands, by Hughes Communication India Limited, having its corporate head office and communications HUB at Plot #1, Electronics City, Sector 18, Gurgaon. The land on which the office premises is built is owned by Imaging Solutions Private Limited of which Baig is the owner/director.

As per written reports of the Chief Administrator HUDA, and the Estate Officer HUDA, HUGHES in flagrant violation of the building plan sanctioned by HUDA and other by-laws illegally constructed two extra floors on the said premises and committed many other non-compoundable building violations. Despite the additional construction being illegal, the Company and its management managed to illegally procure an Occupation Certificate (“OC”) from HUDA which raises issues of probity and impropriety.  Although HUDA has cancelled the OC way back in 2009, they have not taken any action to seal or demolish the illegal building. Addressing the media in a press conference here, Baig said, “In addition to the aforesaid violations, the management of the company over the years has been operating the premises by flouting all Fire Safety Laws and norms – not only endangering the lives of people working within the premises but also the people working in the adjacent buildings like Maruti Udyog. The premises are being operated without a valid No Objection Certificate (“NoC”) from the fire department, which is not only illegal but exposes the company to a potential fire calamity. The Company has been able to forestall the moral and legal consequences of its acts and omissions, by abusing the process of court, by appealing the orders of HUDA and the fire department before the courts; however the courts have already recognised the violations by the Company.” Baig has also submitted an interim Judgment from a bench of the Punjab and Haryana High Court, in which the bench of the said High Court asks how the Fire Safety Certificate has been given all these years and whether an inspection done the previous time and who were the officers who gave the permission, suggesting that underhand means were used to procure the previous fire safety certificate. Despite these grave allegations from the High Court, the Authorities have not taken any action to seal or demolish the building. When asked why he was so insistent on fighting this matter – Baig cited an Order of the Municipal Commissioner submitted to the High Court in 01/10/2014 – in which the Commissioner has written that the Owner will be responsible for any kind of Fire Tragedy. Like in the Uphaar Case – Baig says that even though he has not done anything wrong – in case of any fire tragedy – he and his board members will go to Jail – while the actual perpetrators will go scot-free.  Further – although The Chief administrator HUDA has said in written orders that The owner is not at fault and that all the violations have been committed by the tenants / squatters – yet HUDA has threatened to resume the property from the owner .