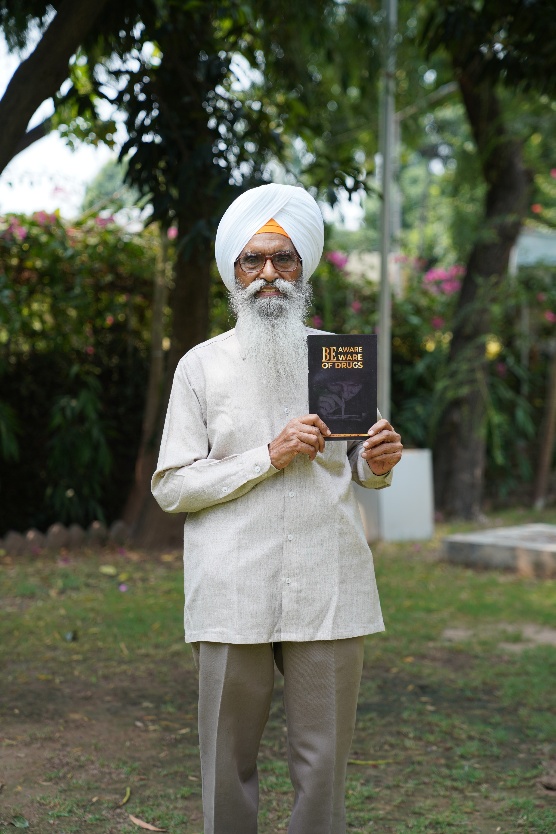 Prevention is the best treatment of drug addiction which is a chronic relapsing brain disorder that causes a person to take the drugs repeatedly despite the harm they cause, says Dr (Col.) Rajinder Singh, the 90-year-old Chandigarh based psychiatrist and social worker who has voluntarily treated over 11,000 drug addicts after he retired from the Indian Armed Forces as Senior Advisor in Psychiatry in 1991.

On the release of his book “Be Aware and Beware of Drugs” on the “International Day Against Drug Abuse and Illicit Trafficking” here today, Dr Rajinder Singh said the book being launched specifically focuses on creating awareness about harms of various types of drugs and the prevention of substance abuse. He says the old adage “Prevention is Better than Cure” is very appropriate as it is easier to stay out of drugs than to come out of them.
Dr Rajinder Singh, a former adviser (Psychiatry) Armed Forces is presently the Director of two drug de-addiction centres, one in Cheema (Sangrur) and another in Baru Sahib (Sirmour) in Punjab and Himachal Pradesh, respectively. These centres run by The Kalgidhar Trust are the biggest de-addiction centres in both the states.

Dr Rajinder said the incorporation of spirituality into the treatment plan fills the voids that the addicts might be trying to fill with drugs or alcohol. This is one of the important aspects of the holistic treatment being provided to the addicts at the de-addiction centres being run by the trust.

Dr Rajinder Singh points out that there is a false notion about alcohol that it is of some use in relieving certain ailments, whereas it is otherwise. It causes more than 200 illnesses. Alcohol use is associated with around 50 percent of the road accidents. While tobacco is one of the most common addictions and the cause of around 40 percent of all cancers. Ten lakhs of people die every year in India due to tobacco related health hazards. Tobacco and alcohol are among the main gateway drugs leading to consumption of drugs like opioids (smack, heroine etc). Millions of deaths and ailments can be prevented by creating awareness and imparting education on drugs.

The book was released by Dr Savita Malhotra, former Dean and Professor and Head of department of psychiatry, PGIMER, Chandigarh who was the chief guest on the occasion.
Among those present on the occasion also includes Dr Shubh Mohan Singh, Professor psychiatric, PGIMER Chandigarh
Dr Neelam Kaur, Adviser Health and education, The Kalgidhar Trust proposed the vote of thanks to all the dignitaries.
The event marked the presence of relatives and guardians of the drug addicts who were successfully treated under the guidance of Dr Rajinder Singh and are leading normal lives.