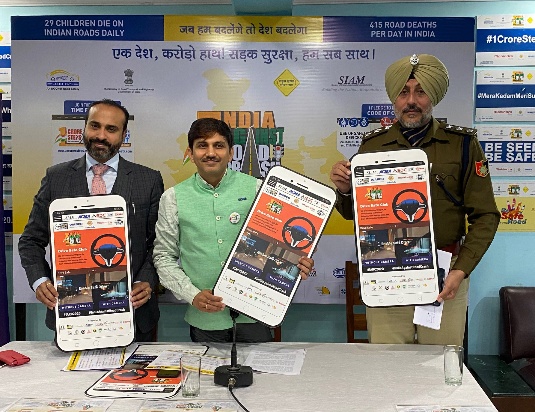 Crores of Indians travel on roads and 415 never come back home, every day. Road Deaths are biggest cause of Unnatural Deaths in our Country.

The objective of the campaign is  to start a sustainable chain of Nationwide activities, which will  not only make people aware & transform their  behaviour on roads but it  will also  lead to formation of Road Safety Clubs among corporates, institutions & organizations at various locations and make Indian roads safer for everyone. The campaign aims to educate and seek commitment from people towards self-enforcement.

Giving the details, Rama Shankar Pandey, MD-Hella India Lighting Ltd., one of the partners said, “The campaign is starting on 11th January, as part of the Road Safety Week announced by Ministry of Road Transport & Highways from Wagah Border where around 50,000 people are expected to take the safety pledge in one go which itself will be a record. Lakhs of people are expected to join the campaign from all over the country in more than 70 Locations.” He added a Walkathon will be organised at CGC Landran on January 15.

He said, while there are many causes of accidents, it is important to ask ourselves what we can do to arrest these deaths. The campaign aims to Positively reinforcing safe driving by forming drive safe clubs where committed Road Safety Warriors will then be recognized on a national level by the collaborative platform of Road Safety Organizations across the country.

Jaswinder Singh, DSP Road Safety, said, “We should first follow traffic rules and then expect others to follow it. Residents have improved a lot and are more disciplined on the road. If we are disciplined and following traffic rules there will be less accidents and less fatalities. We can ensure proper enforcement with active participation of citizens and the change will come spontaneously. For those on two-wheelers he said, they should ensure they buy proper helmets as it is for their safety only. To make the city horn free, he urged people to don’t honk unnecessarily until its required.”

The campaign has Principal Sponsor as Mahindra & Associate partner as  Wabco & Brakes India and is supported by Hella, among others. Rotary Clubs, Schools & Colleges, Traffic Police organizations across the country are also expected to join the campaign in different parts of the country.

Week-long campaign  will get  to  the  minds of people by inspiring them with activities  like:  taking  a two-minute s pledge of 6-point road  safety  code  of  conduct; Observing  a minute  of  silence  for millions  of victims  who  died  in road crashes around the country; A short road safety walkathon &  walk  donation, Coming  together & forming a road safety human chain; Collective  listening of Road  Safety  Anthem and encouraging  to  form  local  Road  Safety Clubs. Central theme of the program is to enrol  people from all walks of life to came together and commit for  Safer Road Behaviour by taking 2 minutes pledge of Road Safety Code of Conduct.

Pandey added, it’s not just a one-off campaign during the road safety week but a long term commitment to form India’s 1st of its kind Drive Safe Club which grows the safe driver community by sensitising self-discipline and continuously improve them by behaviour based reward system.

The campaign also appealed to organizations, schools, colleges, universities, corporates, start-ups, RWA’s, institutions, clubs to join the campaign  in their own campuses, using portal   http://www.iarc2020.org/ & upload pictures/videos, as it’s a shared open platform to be used by anyone to join the campaign & bring a change.

Club D2S – Drive Smart Drive Safe (D2S) is a Section 25 Company, an NGO that aims to educate people on road safety and reduce road accidents and deaths on Indian roads. It intends to reduce the occurrence of conditions that contribute to fatalities on roads like poor visibility, driver negligence and fatigue, negligence of safety norms, drunken driving, speeding etc.

Through awareness rallies, safety campaigns, street plays, special events and traditional and social media campaigns, the NGO will work towards raising awareness on road safety and connecting with citizens towards best practices in road travel.