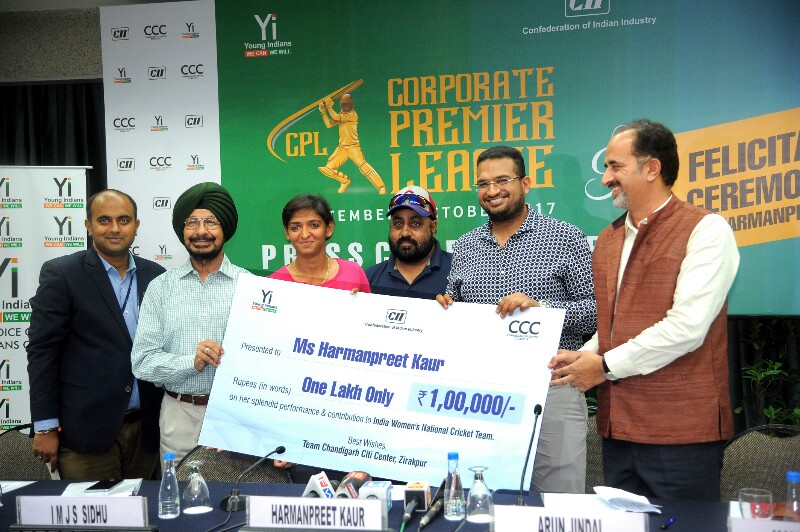 Chandigarh Citi Center in association with Confederation of Indian Industry (CII) felicitated sports icon Harmanpreet Kaur with a cash award worth Rs 1 lakh under their women empowerment initiative during the press conference of CII-CCC Corporate Premier League which was addressed by Harmanpreet Kaur, Vice-captain, Indian Women Cricket Team. Addressing media persons on the occasion, Harmanpreet Kaur announced the launch of CII-CCC Corporate Premier League from September 15till the end of November this year.

Speaking at the Press Conference, Harmanpreet Kaur said, “Indeed it’s a big initiative of CII – CCC oraganising such a tournament wherein 45 teams are participating, including 4 women teams and spread across Northern Region. I wish them great success for CPL 2017.

Arun Jindal, Director, Chandigarh Citi Center, said, “CCC has joined hands with Confederation of Indian Industry (CII) to help unlock opportunities for women in the global space.  CCC also takes great pride in congratulating Harmanpreet Kaur, who had nothing but cricket on her mind. With endless encouragement of her family, she conquered incredible odds on her way to the top of women’s cricket. Her spectacular performance throughout the series, has not only brought glory to the entire nation but also is a great source of inspiration for our budding female sportspersons globally to excel in such championships. CCC is felicitating her for bringing laurels for the state as well as the country.”

IMJS Sidhu, Vice Chairman, CII Himachal Pradesh State Council, said, “Harmanpreet and the women cricket team exemplifies the spirit of the youth today, which is ready to devote themselves to achieve dreams of conquering any field in the world.”

Forevermark launches its flagship store with Fortofino in Chandigarh

Tata Motors and MAHLE partner together to develop a prototype Secondary...