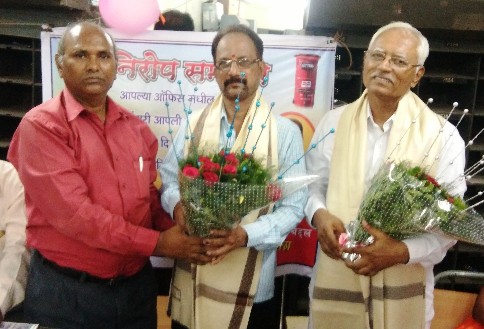 Two postmen Nivrutti Dattatreya Wagh and Ramesh Vasudev Raorane after working for more than 36 years at Zakaria Road Post Office, Malad (West), Mumbai in the delivery department got retired on Thursday 31st May 2018. On the occasion all the delivery post office staff gave them a grand farewell by decorating the post office and a musical troupe. Their Postal Assistant Ramesh R. Jaiswar honoured both of them with a shawl, coconut and bouquet and as a memorable gift also presented them with gold rings. Then one by one all the postal employees and officials of the Federation of National Postal Organisation expressed their views. Hearing them both the postmen Nivrutti Dattatreya Wagh and Ramesh Vasudev Raorane became emotional.

The atmosphere was an amalgamation of happiness and sadness. The entire family of Nivrutti Dattatreya Wagh residing in Pune had come down to take him back to Pune. Ramesh Vasudev Raorane hails from Konkan but he will stay with his son residing at Vasai Road. Speaking on the occasion both of them said that the post office was just like a family for all these years and their heart weeps bidding them goodbye.

It was also revealed that earlier from Jogeshwari to Dahisar there were 850 permanent postal employees. Whilst now the numbers have drastically reduced to 300 while at this Malad post office there were 70 permanent postal employees and now there are only 18 left. All the postal departments rely on the services of only temporary employees or on contract basis. If this exists in the longer run, then the retirement system will completely come to an end. Imagine these postal employees delivering letters on hot summer, rains and winter season, won’t get any benefits and perquisites including the job too will not be a permanent feature.