Hyatt Regency Chandigarh will host the Taste of Britain Curry Festival from March 17–26, 2017. The festival launch will witness the presence of delegates from the British High Commission, iconic British Curry Chefs, eminent journalists from Britain, and VIP guests.

A team of magnificent British Curry Chefs, led by Michelin Starred Chef Rupert Rowley, will produce over 40 dishes during the 10 day festival, giving diners a unique opportunity to taste an exclusive selection of British curry dishes at Urban Café, their multi-cuisine restaurant. Chef Rowley, who has worked with many globally renowned chefs, including Gordon Ramsey and Raymond Blanc, will be showcasing traditional English cuisine at Piccante, the specialty Italian restaurant. Rupert is well known for his passion for food and creativity in the culinary world. 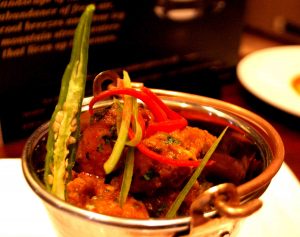 On his first ever trip to India; Chef Rupert said “This is a great opportunity, which excites me to showcase my dishes. My aim is to offer highest quality of British food with the freshest of ingredients; ensuring diners have a memorable experience.

“I am a very big fan of curry and what really excites me most is that I will be working with a team of best curry chefs from the UK. I am really looking forward to flying the flag for British cuisine in India. Hopefully we will get a chance to try some of the local delicacies too.”

General Manager Puneet Baijal said, “We are delighted to be hosting the Taste of Britain Curry Festival at the Hyatt Regency Chandigarh – a place to meet, connect, eat and celebrate. This event promises to be yet another gastronomic celebration of Taste; coming together from two diverse cultures of Britain and India”

British Deputy High Commissioner Chandigarh, David Lelliott said, “India and the UK’s shared passion for curry is a reminder of what Prime Minister Narendra Modi recently referred to as the ‘living bridge’ between our two countries. I am very much looking forward to the Taste of Britain Curry Festival coming to the city.

Organized by Curry Life Magazine, Taste of Britain Curry Festival is a global event, which has, over a decade, promoted the best of British curry in countries as far afield as Europe and Asia. The festival has made stars of chefs by showcasing curry cuisine globally. Top British Curry Chefs create a variety of curry dishes, where people can enjoy a meal and also get the taste of the contemporary popular British curry.