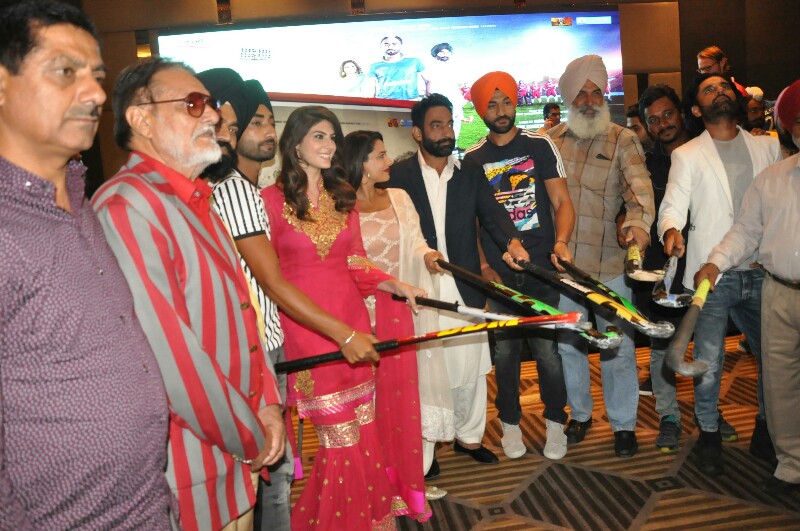 ‘Khido Khundi’, which means Ball & Hockey Stick is the title of Punjabi film dedicated to the a sport which is not just a game, but the  heartbeat of Punjab -the National Sport of Hockey. The film which is produced by Hayre  Productions, Rohit Jugraj and Sagoon Wagh is scheduled for release in March 2018. The film will be marketed and promoted by Unisys Infosolutions  & Saga Music. Saga Music has been known for promoting movies on versatile genres and once again they are doing the same by promoting one of a kind sports illustrated film.

The movie is directed by Jugraj himself, who turns producer too with it. The Star Cast, Crew & many Hockey Olympians gathered at Hotel J W Marriott to talk about  the unique Punjabi ‘Sports Movie’. The film will bring into limelight the small village – Sansarpur on outskirts of Jalandhar, which has produced as many as 14 Hockey Olympians.

“Sports plays a pivotal role in society hence we believe in promoting the same and I am sure that the film will fulfill vision for the same.” Said Talwinder Hayre, CEO Hayre Entertainment, who is famous for organizing events like Kabaddi League in Jalandhar since 2013.

Ranjit Bawa, an ace Punjabi singer who created a sensation with his album ‘Mitti Da Bawa’ will be the male lead in the movie, in the female lead will be Mandy Takhar who has made a name due to her acting skills in films like like Sardaarji, Mirza etc. Manav Vij, who has received rave reviews for his performances in Bollywood films like like Udta Punjab & Naam Shabana is also in the star cast. Iranian Model Naaz Norouzi will be debuting in it.

“The story revolves around two Punjabi NRI brothers who aim to make the game of Hockey come alive again, against all odds” , Said Sagoon Wagh, who earlier has handled various projects in Bollywood.

“Sandeep Singh, Former Captain of Indian National Hockey Team has been training the cast in finer nuances of the game.” Said Producer-Director Rohit Jugraj, who is known  for directing successful films like SardarJi I & II. Adds Sandeep Singh, “It’s a new role that i am engaged in and am enjoying it to the fullest.” Adds Sandeep Singh.

“I am extremely delighted to be part of this path breaking film, which is being made to focus attention of all Indians on Hockey”, Said Singer turned Actor Ranjit Bawa.

“ ‘Khido Khundi’ will be the first Punjabi film that will be based on Hockey & will document the game well in a fictional & fast paced story.” Adds Manav Vij.

“It has been lovely working under direction of Rohit Jugraj & with the entire team. I am looking forward eagerly to the film’s release.” said Mandy Takhar. The versatile Guggu Gill is also doing an important role.  “We proudly offer the platform of our film to each & every Hockey player to be part of this movie alongside the Star Cast.” Said Guggu Gill.

On being the core organization responsible for the promotions of the film, General Manager of Unisys Infosolutions, Simranjit Singh said “We​ ​are​ ​extremely​ ​delighted​ ​to​ ​promote​ ​this incredible​ ​film,​ ​which​ ​is​ ​being​ ​made​ ​to​ ​glorify​ ​the​ ​sport”.​ ​Theatrical distribution of the film will be managed by Omjee Group India.