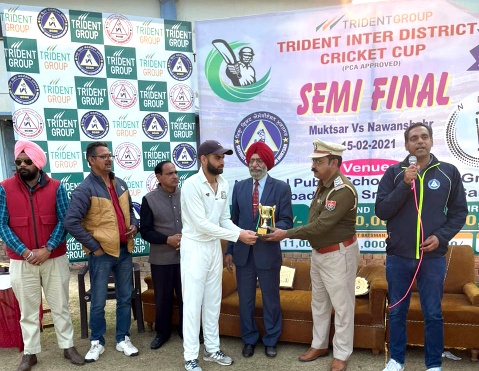 The Trident Inter District Cricket Cup 2021, an award-winning tournament recognized by the Punjab Cricket Association for the purpose of promoting the game of cricket in Punjab, is being sponsored by the Trident Group of Companies, in which a total of 15 District Cricket Association (DCA) teams participated. In this tournament, the winning team will be given 1.50 lakh, the runner up team 1 lakh, the third place team will get a cash prize of 50000. Apart from this, a prize of 21000 will be given to the best player in the tournament, 11000 each to the best bowler, best batsman, best wicket keeper and best fielder in the tournament.

A brief of the semifinal matches played today:

The first semi-final was played between Bathinda DCA and Hoshiarpur DCA at the Cops Club Bathinda, where also the number of overs was reduced from 50 to 49 due to delayed start of the match due to bad weather. Today’s important toss was won by Hoshiarpur DCA team and they decided to bat first. Batting first, Team Hoshiarpur DCA made a total runs of 208 for loss of all their wickets in 46 overs.  Inder Gary scored 35 (in 76 balls), Karan Chawla 33 (36 balls with the help of five boundaries and a six), Ashish Ghai 32 (30 balls with three boundaries and a six) and Manjinder Singh 35 (With the help of four boundaries and two sixes in 30 balls) contributed significantly to the total score. While bowling for Bathinda DCA, Uday Saharan took three wickets (9-1-37-3), Arjun (5-0-41-2) and Taranpreet (10-2-29-2), two each and Palash and Kamaljeet took one wicket each.

Chasing the target of 209 runs to win the match Bathinda DCA didn’t start well in their batting innings, they lost 3 early important wickets in 9 overs for just 17 runs followed by another in 18th over when the total score was just 53. Bathinda DCA’s captain Arjun inbetween batted well and scored his 50 in 53 balls. Things seemed to have settled a bit for Bathinda but in 24th over Hoshiarpur’s Bowler Karan Saini took a catch of his own balling and sent Arjun back. Although Bathinda’s Navkaran in-between made a valiant effort to swing the match in his teams favour but failed to find a support on the other end to pull it through. Bathinda DCA was bowled all out for 171 runs in 43.3 overs and Hoshiarpur DCA won the match by 37 runs thereby securing their position in the mega finals.

Karan Chawla of Hoshiarpur DCA was adjudged the Man of the Match for his all round performance. In addition to his batting score of 33 runs, he took 4 wickets in his bowling spell of 10 over’s giving away 44 runs.

The second semifinal was played between Muktsar DCA and Nawanshahr DCA at NPS Cricket Ground Muktsar in which the match started a little late due to bad weather and the total number of overs was reduced from 50 to 46. Today’s important toss was won by Nawanshahr’s team and they decided to bat first. Batting first Team Nawanshahr made a total of 172 runs losing all their wickets in 45.2 over’s. Aman Ghuman made 33 of 57 balls, Himanshu scored 34 in 36 balls with help of 4 boundaries and a six, Sukhwinder Singh made 22 runs in 13 balls with the help of 3 boundaries and a six, Prashant  made 21 runs of 38 balls he faced.  Amongst the bowlers of team Muktsar Amandeep Singh Sikander bowled brilliantly and in his spell of 10 overs took 4 wickets giving away 37 runs (10-2-37-4), Harjot Dhawan took 3 wickets in his spell of 9 overs (9-0-52-3). Amandeep Singh Sonu and Jashanpreet took 1 wicket each.

Chasing the target of 173 runs to win the match Muktsar DCA lost 2 early wickets, score was 42 for loss of 2 wickets in the 12th over, but excellent partnership of batsman Kashish Panseja and Dhruv Verma steered the team towards victory.  Kashish made a century off 127 balls before getting out which turned out to be crucial for cementing his teams place in the finals. Muktsar DCA won by 6 wickets in 45.2 overs .

Kashish Panseja was declared the Man of the match for his match winning performance.

The title fight between DCA Hoshiarpur and DCA Muktsar will now be played on 18th Feb at Trident Cricket Grounds Barnala , whereas for the 3rd position Bathinda and Nawanshahr will compete in Bathinda on Feb 17th  .