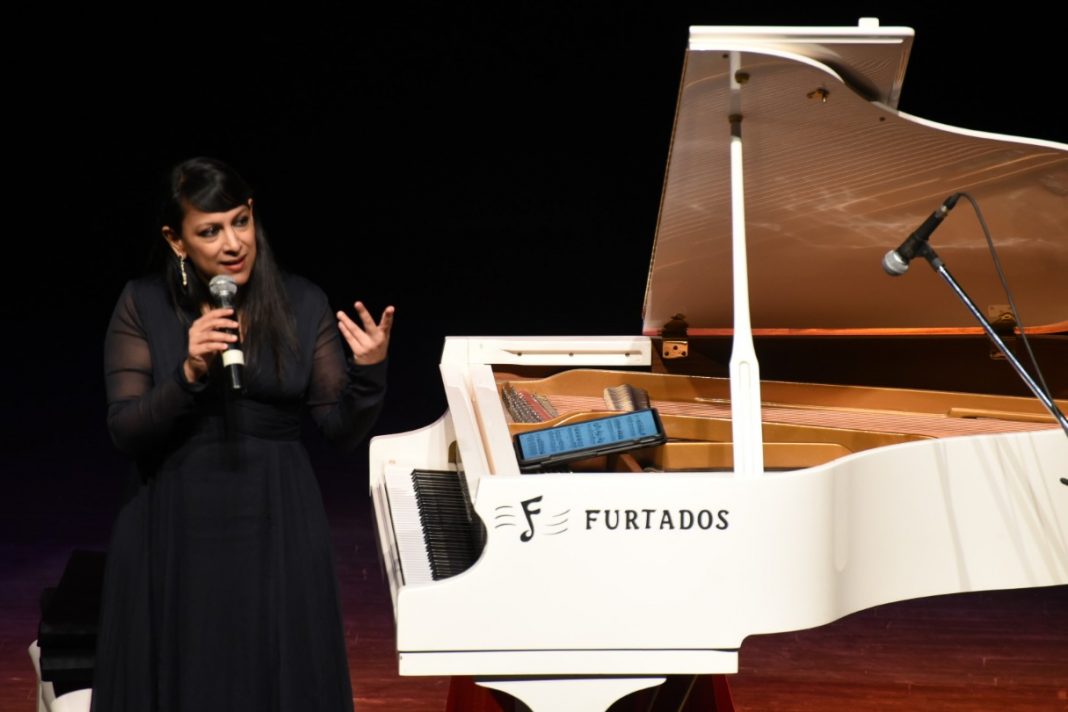 A unique concert of the French piano virtuoso, Shani Diluka, was held here today at the Tagore Theatre. Shani Diluka is one of the greatest pianists of her generation.

The concert was offered by the French Embassy in India, Institut Français, Alliance Française de Chandigarh, the Chandigarh Cultural Department and Furtados. The entry was free for all.

Born in Monaco from Sri Lankan parents, she was discovered at the age of six by a program initiated by Princess Grace of Monaco for exceptional talent. She is the only pianist from the Indian continent to enter Paris Conservatory gaining 1st prize with Unanimity of the jury, and to enter the prestigious Lake Como International Piano Academy presided by Martha Argerich. After legends like Callas, Rostropovitch or Menuhin, she joined the prestigious label WARNER Classics as an exclusive artist.

Interpreter who “masters the craft of music (Suddeutsche Zeitung) endowed with a “winged virtuosity” (Classica),”one of the greatest of her generation” (Piano Magazine), regularly invited by eminent Orchestras and conductors, performing in major venues, Shani Diluka bridges the gap between East and West, between her piano and writing poetry (her book was on the prize list of Academie Française).

“It was very natural for me to choose the piano. I chose it myself,” says Shani Diluka talking to the media here today.

Having to travel constantly, she is only home 10 days a month and jokes that her luggage is constantly open as she is never in one place for too long. Both she and her husband – the violinist Gabriel Le Magadure, being world-class musicians they had to make a choice of not having children for their careers to flourish.

“As a pianist my only goal is to bring beauty to the people (through her music). So that people can feel better about themselves, it is as if they have meditated,” she says, remarking that her most significant memory as a musician is when she is able to see the faces of an emotionally moved audience.

Shani at the tender age of six was told to choose an instrument of her liking, under a programme for gifted young musicians set up by Princess Grace. Thus she took her first steps in a momentous journey that would see her become a world-class pianist.

It was a journey marked by many awards and accolades. She was accepted into the Paris Conservatory where she won first prize unanimously chosen by the jury. A stellar career has seen her as a soloist for famed orchestras such as the Orchestre Philharmonique de Monte-Carlo, the Orchestre National Bordeaux Aquitaine, the Royal Court Orchestra of Sweden, to name a few. She has worked with leading  conductors such as Lawrence Foster, Vladimir Fedosseïev, Ludovic Morlot, etc and her solo recordings of Beethoven, Mendelssohn, Schubert and Grieg have won a large number of awards.

One of her greatest accomplishments was being awarded the Knight of the Order of Cultural Merit of Monaco, given in recognition to those who have made a distinctive contribution to the arts, letters or science through their work or teaching in Monaco.

Shani Diluka is touring only in two cities in India, Delhi and Chandigarh.