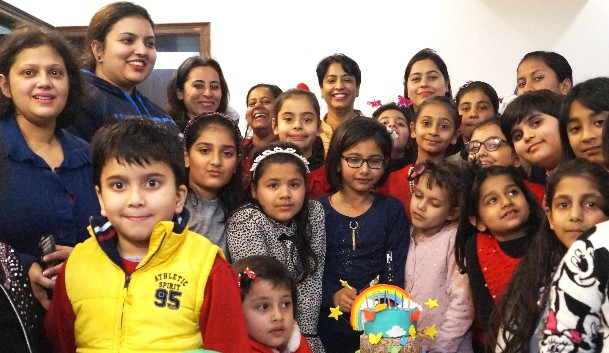 “Dhiyan Di Lohri” (Lohri of daughters) by promoting “save the girl child” with fun-filled cultural activities, energetic and traditional performances was celebrated in a function held recently. Girl children participated with their mothers.  The cake cutting ceremony was also held for those girl children whose birthdays fall in the month of January. Sweets, gifts & other eatables were also distributed. Dance performances presented by the children were the main attraction of the function.

Dr (Mrs) Parveen Kataria, Director General, Aryans Group of Colleges said that Aryans Group marked the festival to spread a social message to save the girl child. She further said that it is time to put an end to girl child discrimination and give them a chance to achieve their full potential. This event will be an agent of change, in altering people’s perspective when it comes to having girl children, she added.

Mrs Raman Rani Gupta, Director Academics, Aryans Group said that the children were more enthusiastic than the elders in spreading the message that Lohri for girls should also be organized, as they are equally important in the society. She further said that the function cheered everyone especially girls up.

Mrs Sukhaman Bath, Registrar, Aryans Group said that traditionally, people celebrate the first Lohri of only a male child. But with changing times, families these days take great pride at the birth of daughters too. The reason may be because girls are more caring towards their parents than boys.”

It is to be mentioned that Lohri falls on the Paush month and is usually celebrated with much splendour on January 13. The festival is considered to be one of the most important occasions in Punjab, especially for the newborn and newly-wedded couples.