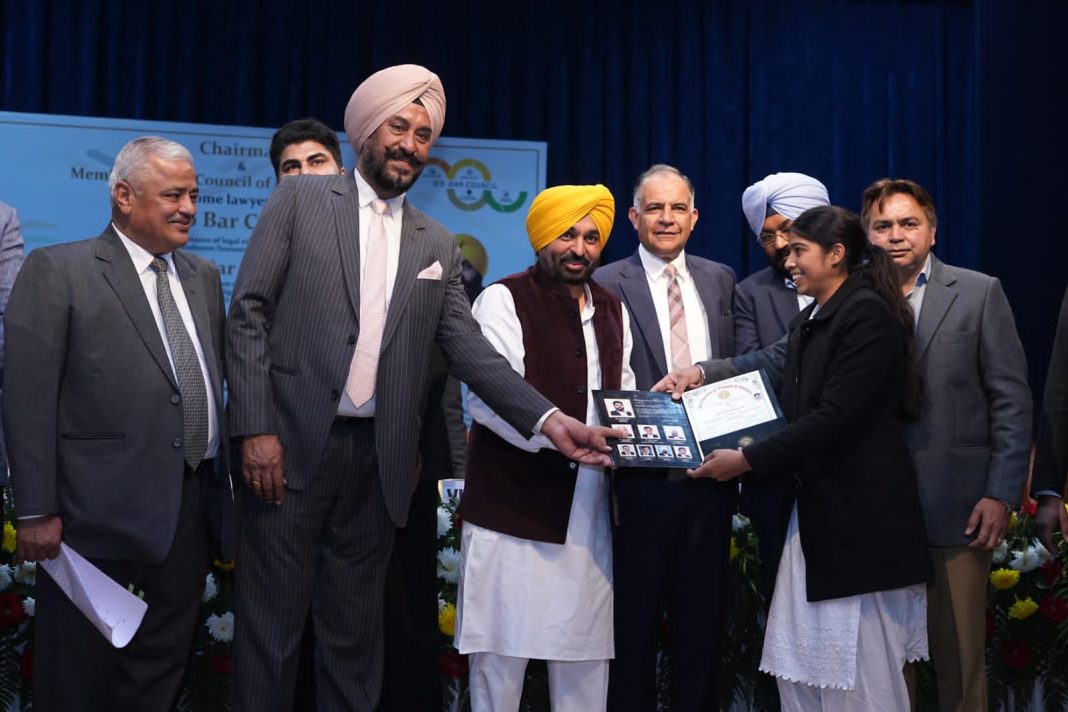 Punjab Chief Minister Bhagwant Singh Mann urged the budding lawyers to pursue their profession with passion. He said that when both enthusiasm and passion come together, there is no such work which cannot be completed.  He said that juniors should take guidance from their seniors so that a good understanding can be created among them. Junior should also be involved in big matters, this gives junior experience so that he/she can understand the matter very well. Chief Minister congratulated all the lawyers on the digitization of the Bar Council.

On the occasion, Suvir Sidhu, Chairman, Bar Council of Punjab and Haryana, welcoming Punjab Chief Minister Bhagwant Mann as the chief guest, advised the newly enrolled advocates to maintain the dignity of the noble legal profession.  Giving information about the e-Bar Council Services, he said that the various services have been completely digitized by the Council, in which the need for advocates to come to the Bar Council for any work will be reduced. They will be able to access various types of services by visiting the website of the Bar Council. These services include facilities like Enrollment Certificate, Renewal Insurance, Continued Certificate, Duplicate Enrollment, Identity Card, Regular Enrollment which will save the time of advocates.
Punjab Chief Minister Bhagwant Mann distributed a fund of Rs. 54 lakh 80 thousand to the families of 23 deceased lawyers through Punjab Advocate Welfare. The Advocates welfare funds tickets fix on the Vakaltnaama and other documents filed before the honorable court. The collection of the fund from the stamps of AWF are distributed to the deceased advocates from the state of Punjab.

Rajya Sabha member Raghav Chaddha revealed his desire to become an advocate in the launch of E-services portal in Punjab . He expressed his appreciation towards the lawyers and the newly graduates . In his speech he emphasized on the legal license to practice law and represented it as a responsibility to uphold acmes to justice. Chaddha also highlighted the severe issue of common citizen seeking justice prevailing in a country like India. He also emphasized on the amount of tendencies sitting currently in courts and hoped a hand-in-hand efforts of the government and the judiciary to resolve the issue in hand. Chaddha put a light on the recent witnessed combats among the executive and the judiciary. He urged and showed hope to practice healthy relationship among the three pillars – The legislature, Judiciary and the executive and work closely. He concluded his speech by congratulating the bar council of Punjab and showed his confidence in the service.

Mediclaim rejected on ground of “polyps”: Doctor says polyps not cause...