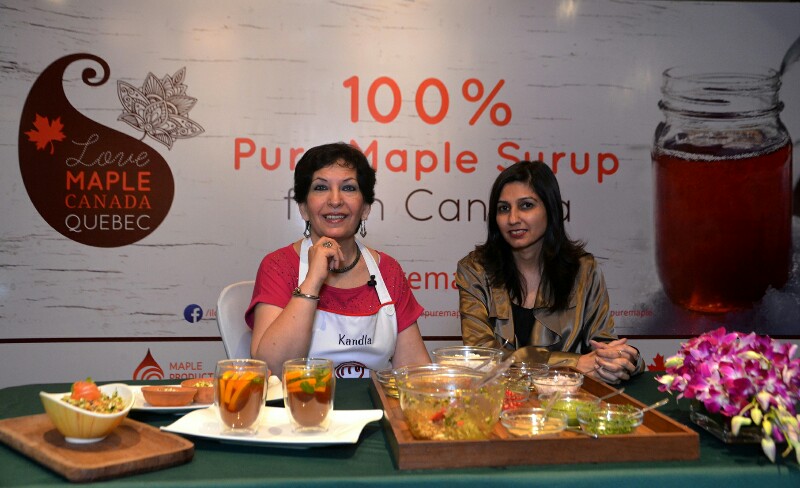 Sugar and other sweeteners are an integral part of our diet, however, eating too much sugar can lead to lifestyle diseases like diabetes, obesity and inflammation. 100% Pure Maple Syrup from Canada is a healthier alternative to sugar and other artificial sweeteners as it isnatural and pure and is an excellent source of essential nutrients. This was demonstrated during an interactive and fun afternoon hosted by theFederation of Quebec Maple Syrup Producers,Canada at JW Marriott in Chandigarh, today.

During the course of the event, renowned nutritionist and author Kavita Devgan spoke extensively about various health benefits of 100% pure maple syrup and its versatility, while Chef Kandla demonstrated some easy-to-make-at-home recipes using pure maple syrup, and depicted how easy it is to incorporate it in both sweet and savoury dishes.

Nutritionist and Author Kavita Devgan said, “100% pure maple syrup from Canada is already known to us as a natural sweetener. The fact that it is an excellent source of manganese and riboflavin (B2), a good source of magnesium and multiple other nutrients like calcium, potassium, sodium, copper and zinc, makes it a healthier alternative to sugar. Pure maple syrup contains a significant amount of phytohormones of the abscisic acid (ABA) family, a molecule that may help against the inset of insulin resistance which is great news for diabetics, those looking to knock off some weight as well as athletes. Simple modifications in the daily diet and regular exercise may help one in leading a healthier and a fitter life.”

Maple syrup is known as liquid gold in Canada, where nearly 78% of world’s maple syrup is produced. Several studies are examining various benefits of maple syrup and early indications from these studies indicate that maple syrup may contribute to health and well-being in multiple ways.

Pure maple syrup contains 65 polyphenols/types of antioxidants, nine of which are unique to maple syrup, offering health benefits similar to those of berries, tea, red wine, flax seed, other fruits and vegetables. 100% pure maple syrup from Canada is a nutritive gourmet product that can enhance the taste of the dish – be it beverage, appetizers, main course or desserts.

The nutritionist also spoke about the cause for various lifestyle diseases that can be attributed to the consumption of unwanted calories in form of foods high in sugar. She highlighted the fact that sugar is addictive and the love for the ‘sweet’ taste is difficult to shake off because of the physiological responses that are unique to sugar. Sugar like other addictive substances stimulates the release of a neurotransmitter called dopamine in the brain, which produces an intensely pleasurable sensation that we then crave to repeat. It’s important to break this sweet-vicious cycle.

Therefore, instead of simply trying to cut off sweets altogether, a better way would be to switch to a healthier alternative that is sweet yet less damaging than sugar. 100% pure maple syrup from Canada can be a direct healthier substitute for liquid sweeteners, such as honey, treacle and corn syrup, without any adjustments.

The Federation of Quebec Maple Syrup Producers does not promote an increase of sugar consumption. When choosing a sweetener for moderate use, it appears that 100% pure maple syrup from Canada has more healthful compounds compared to some other sources of sugar.

The Federation of Quebec Maple Syrup Producers (FPAQ) was founded in 1966. Its mission is to defend and promote the economic, social and moral interests of some 7,300 Quebec maple businesses, as well as to develop initiatives that collectively market the products that flow from Quebec’s 44 million taps. The quality work of these maple producers has made Quebec the source, on average, of 78 percent of the world’s maple syrup production and 90 percent of Canada’s maple syrup output. Together, Ontario, New Brunswick and Nova Scotiacontribute the other 10 percent of Canadian production.

FPAQ proudly promotes the reference brand Maple Products from Quebec in addition to coordinating the international promotion and value creation of Canadian maple products on behalf of Canada’s maple industry. In this capacity, the FPAQ leads and directs the research efforts of the Réseau international d’innovation des produits d’érable duCanada.

7 kinds of crafted beers for each of your taste bud