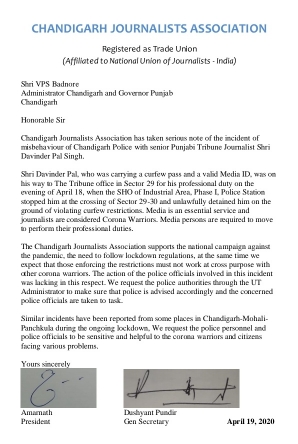 Taking serious notes of the Chandigarh Police misbehaving with senior Punjabi Tribune Journalist Shri Davinder Pal Singh, the Chandigarh Journalists Association (regd) has taken serious note of incidence. The association has written to the Governor Sh V P Badnore requesting that the police personnel and police officials asked to be sensitive and helpful towards corona warriors and citizens facing various problems. They have also demanded action against the errant police officials.

In a press statement issued here today, Association President Amarnath and General Secretary Dushyant Pundir stated that on April 18, the senior journalist Shri Davinder Pal, who was carrying a curfew pass and a valid media ID, was on his way to The Tribune office in Sector 29 for his professional duty. The SHO of Industrial Area, Phase I, Police Station stopped him at the crossing of Sector 29-30 and unlawfully detained him on the ground of violating curfew restrictions. Media is an essential service and journalists are considered Corona Warriors. Media persons are required to move to perform their professional duties.

They said that the Chandigarh Journalists Association supports national campaign against pandemic, the need to follow lockdown regulations, at the same time it expects that those enforcing the restrictions must not work at cross purpose with other corona warriors. The action of the police officials involved in this incident was lacking in this respect.

The Association has requested police authorities, through the UT Administrator to make sure that police is advised accordingly and the concerned police officials are taken to task. Similar incidents have been reported from some places in Chandigarh-Mohali-Panchkula during the ongoing lockdown.

Rap and rock with Rocky in Carnival 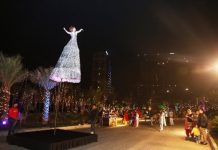 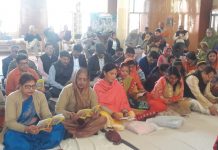 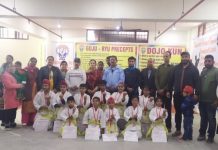