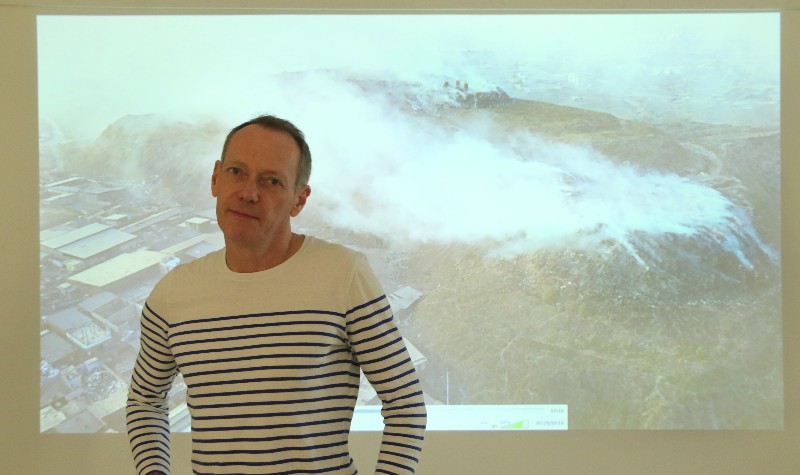 As part of Digital November, an international festival of digital cultures by the entire network of Alliance Française in India, Biomimetics by French visual artist Pierre-Jean Giloux was screened today at Alliance Française, Sector 36 here.

The film is inspired by the urban forms of different cities in India and the coexistence with nature as part of the Indian way of living. The exhibition consists of a video installation that takes the form of a multi-screen device. The project has been supported by the French Institute in India and French Embassy, along with Alliance Française.

Biomimetics superimposes a digital augmentation to real-life footage, known as augmented reality. It is a fictional documentary conceived by French artist Pierre-Jean Giloux on an evolving basis combining the real and the virtual, using videos and photographs sometimes reworked with 2D and 3D digital tools.

Giving the details, Giloux explained, “The film project was born following residency carried out in February-March 2020 in India in Cochin, at the invitation of Alliance Française de Trivandrum and Institut Français India. This research phase focused on visual and sound recordings of different cities. This film unveils virtual urban organisations inspired by living organisms that outline solutions to the problems that cities generate pollution or that they are faced with climate change.”

“The audience should feel that they are in the film. I like to recreate the same scale of elements as seen in the real world so that people feel the infinitesimal state of humans with respect to the world around us,” he explained.

Biomimetics’ is essentially an artist’s view on how nature can help architecture, urbanism and overall humankind with our problems like pollution and climate change. It involves getting inspired by nature to create urban forms, thus leading to a more sustainable lifestyle.

The artist, besides Chandigarh, will tour in Bangalore, Trivandrum and Ahmedabad as part of the project.