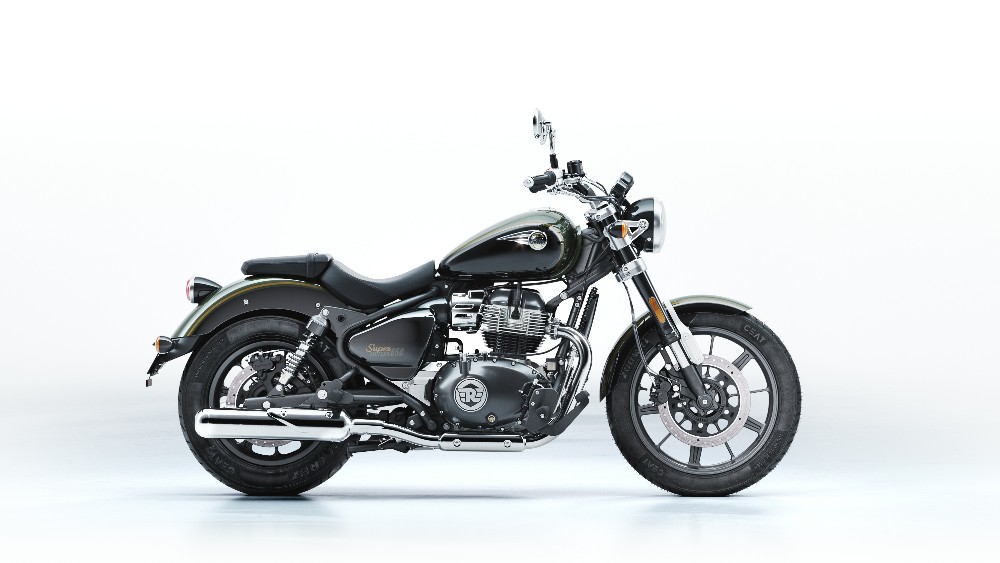 Injecting a new level of character, style and accessibility into the cruiser category, Royal Enfield showcased the gorgeous new Super Meteor 650 at EICMA in November 2022, and then displayed the motorcycle in all its colourways at the brand’s annual motorcycling festival – Rider Mania.

The Super Meteor 650 continues Royal Enfield’s heritage of building superlative cruisers. It is centered around the acclaimed 648cc twin platform that, since 2018, has enjoyed worldwide recognition within the multi-award-winning motorcycles, Interceptor INT 650 and Continental GT 650. It has been rigorously tested on proving tracks, Belgian PAVE, and the highways, byways, towns and city centres of India, the UK and Spain, clocking up over one million kilometres in the process to ensure the most reliable and enjoyable ride.

Commenting on the new Super Meteor 650 Siddhartha Lal, Managing Director of Eicher Motors Ltd. said, “The Super Meteor 650 is an evolution of all our focus and efforts in the middleweight segment over the years, and is a thoroughbred, retro cruiser in every sense. Its design language, geometry, form-factor and the gorgeous 650cc twin engine make it the most stunning, accessible and capable cruiser in the category. We’ve enhanced the refinement levels of this motorcycle, and you can feel it in its smooth throttle response across the range. The motorcycle has confidence inspiring stability, takes corners well and feels planted at highway speeds. It is a perfect mid-segment motorcycle that may actually interest even people who are not interested in cruisers. We believe the Super Meteor will expand the market for cruisers around the world and take the Royal Enfield twin platform a notch higher”

Speaking on the occasion of the launch of the Super Meteor 650, Royal Enfield CEO, B Govindarajan, said, “We have focused not just on building great motorcycles, but reimagining propositions that transcend traditional motorcycling segments. The Royal Enfield Meteor 350 that replaced the Thunderbird in our portfolio did just that, as it made cruising easy for riders across the globe, and became one of our highest selling motorcycles in Europe and other parts of the world. The Super Meteor 650 breathes new life into the cruising segment, and creates its own identity as an authentic, accessible, mid-segment cruiser”

A quintessential cruiser, the Super Meteor 650 combines uncluttered controls and instrumentation with relaxed rider ergonomics; rock-steady stability on highways with pure riding pleasure on even on the most winding roads where it is keenly responsive to steering inputs. Its flexible, smooth engine has torque aplenty and its cool retro styling is infused with clearly recognisable Royal Enfield DNA. It has a physically imposing presence, yet remains an easy ride, whether you are traversing vast landscapes or heading towards the vanishing point on the horizon.

Over the years, Royal Enfield has made exceptional contributions to the cruiser category with stylish motorcycles that have founded new, niche markets. Beginning in the mid-1950s, it was decades ahead of the cruiser genre being defined when it produced US export variants of the original Redditch Super Meteor twin, with what is today considered to be a strong cruiser profile. It then introduced cruising to India with the Citybike, Lightning 535, at the time the biggest and baddest motorcycle on India’s roads, and a succession of 350 and 500cc Thunderbirds, which garnered a large and loyal following. Global success followed in 2020 with the launch of the Meteor 350 on the brand new J-series platform. The Meteor 350 upped the tempo with new standards of finesse, quality and, most importantly, rideability.

Created at the UK Technology Centre in conjunction with Harris Performance, the frame and swingarm are entirely new and meet the design brief of a motorcycle with a low centre of gravity for high-speed stability and easy manoeuvrability that is confidence inspiring for all levels of rider. Fabricated in steel with optimised forgings, investment castings, pressings and extrusions, the chassis incorporates a new cylinder head mount for additional stiffness. Royal Enfield’s first USD forks, with a 120mm stroke, and premium rear shocks with 5-step preload and 101mm travel, perfectly complement the new frame, ensuring the Super Meteor is stable and rewarding to ride on highways and precise and engaging through the curves without being heavy to steer. The USD forks allow the motorcycle to maintain a controlled response throughout the range of suspension travel, and the big piston damping technology allows for a plush and planted ride Unintimidating and practical, the Super Meteor 650 has the silhouette of a thoroughbred cruiser, with a low stance and seat with wide hips and a narrow waist, which allow a comfortable standover.

Riding position is one of the key differentiators of any cruiser and the Super Meteor nails this with fully feet-forward foot controls and raised, wide handlebars. These fundamental cruiser design elements meld to make the rider feel they are part of their motorcycle. A large tank gives extended range and wide tubeless tyres on 16” rear and 19” front alloy rims provide dependability and peace of mind at highway speeds. Its dynamic design and a striking silhouette add to the streamlined look of the motorcycle, giving it the appearance of moving forward and cruising even when standing still.

The rider’s view and controls have received special focus to ensure that the design, fit and finish are class-leading. Its instrument cluster combines the timeless elegance of an analogue speedometer with the functionality of an LCD display for essentials such as revs, gear indicator, fuel gauge, clock and tripmeter. Adjustable clutch and brake levers offer a smooth operation along with a touch of retro finesse, while ergonomically designed barrel profile grips integrate the Royal Enfield logo. All-new plated aluminium switch cubes hold unique rotary switches, placing premium, chic design elements into the rider’s hands. Then there is Royal Enfield’s celebrated TBT (Turn-By-Turn) navigation pod, known as the Royal Enfield Tripper. A first on any Indian-made motorcycle when introduced on the Meteor 350, this highly-focused tool, developed in collaboration with Google, links to the rider’s smartphone via Bluetooth. A discreet USB socket is located beneath the left side panel. Further attention-grabbing features on this cruiser are its LED headlamp, a first for Royal Enfield, which is carefully designed to deliver old-school charm but provide all the benefits of LED technology.

Finally, the Super Meteor’s paint finish is superlative while its distinctive tank badges, inspired by historic Royal Enfield designs, are faceted in chrome and accented with two colours of tinted infill that result in a gorgeous, jewel-like finish.

All GMAs can also be ordered when booking your motorcycle through Royal Enfield’s innovative MIY,

Make It Yours, personalisation programme, either online or in your local dealership at a later date. A stylish, high-quality range of gear, including Super Meteor t-shirts, helmets, bags and accessories, is also available.