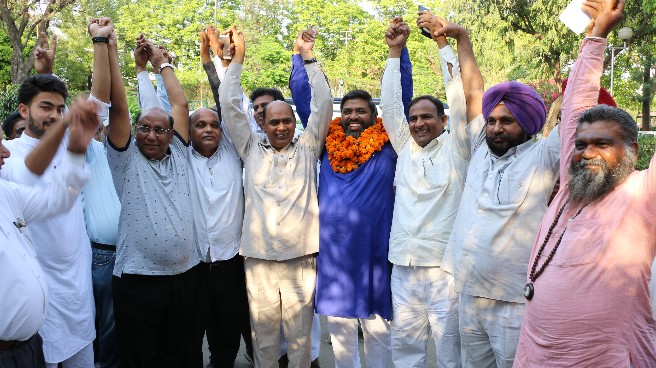 Chandigarh
22 April 2019
DIVYA AZAD
Dr Meghraj, Convener – BSP, Haryana and Randhir Singh Beniwal today formally announced Praveen Tank will contest from Bahujan Samaj Party (BSP) for Chandigarh seat in the upcoming Lok Elections. Praveen is a Mohali based construction contractor is a noted dalit leader has spearheaded numerous campaign for dalit samaj in the region. Tonk is cashing high on over two lakh population of dalit samaj and hopeful this time party will get massive support from this sect of society.
Tonk, who is also a former councilor from Gidderbaha is currently running a nationwide movement ‘Adhas Bharat’  and is considered to be very popular identity in dalit samaj.
In his address, Tonk said, Mayawati in her continuous efforts is a driving force to uplift the dalit samaj and this is one of the reason, party has extended its reach to Punjab and Chandigarh. Mayawati will be joining the campaign on May 12 where she will addressing the gathering  in Chandigarh
“With the BSP-SP alliance in Uttar Pradesh, this formation has gave birth to political equation which can resulted to a boom for nation, though party has decided to contest election without alliance in Chandigarh. People of the country has accepted this alliance and we will not leave any stone unturn to live up to the expectations of the people” said Tonk.