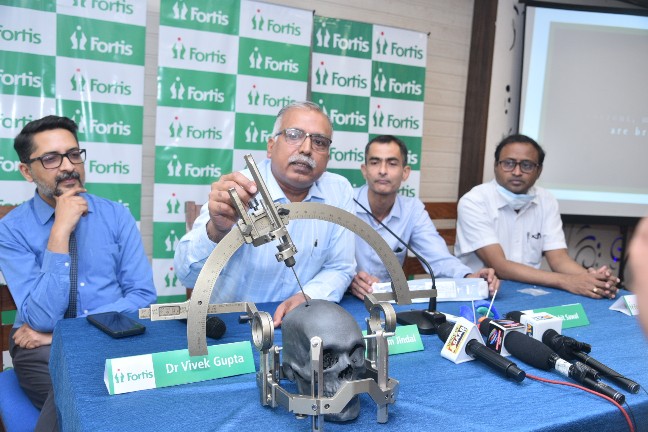 Deep Brain Stimulation is a neuro-surgical procedure that involves using implanted electrodes and electrical stimulation to treat patients suffering from Parkinson’s Disease. The procedure involves implanting electrodes inside the brain to produce electrical impulses, which can treat affected cells and chemicals in the brain.

A 64-year-old Patient from Varanasi had been suffering from Parkinson’s Disease and exhibited symptoms such as trembling of hands, arms, head, difficulty in speaking, stiffness of limbs and impaired coordination. The Patient had become non-responsive to medicines and his symptoms such as tremors, inability to walk etc. had been progressing over time.The Patient approached Dr Sawal at Fortis Mohali recently wherein the Neuro-Modulation team comprising Dr Anupam Jindal, Dr Nishit Sawal, Dr Vivek Gupta, Dr Abhishek Prasad, Dr Hardeep Singh and Dr Bhupinderjit Waraich meticulously planned and conducted Deep Brain Stimulation surgery. Post-surgery, the Patient’s tremors reduced and he was able to walk without any support.

The second Patient, a 65-year-old man from Haryana, had been suffering from Parkinson’s Disease for the past eight years. His illness was in an advanced stage and he was facing difficulty in walking. The Patient’s steps had become shorter and he literally had to drag his feet to walk, and sometimes was not able to take a step.The Patient met Dr Sawal at Fortis Hospital Mohali last year following which Deep Brain Stimulation surgery was conducted on him. Post-surgery, the Patient is able to take longer steps without having to drag his feet and the tremors have subsided significantfly.

Kidney Diseases on the Rise: Lifestyle to blame