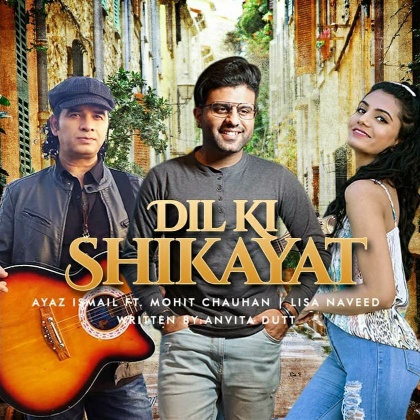 Renowned music composer Ayaz Ismail has released his latest romantic musical track ‘Dil ki Shikayat’, which is sung by Mohit Chauhan. The song has Lisa Naveed as the female lead. The lyrics are written by Anvita Dutt – director of recently released Netflix film ‘Bulbul’. The song already has got more than 1.3 million views on YouTube. This is a sweet romantic track which is already ruling people’s hearts.

Describing the song, Ayaz says, “The idea behind this creation was a distanced love in a magical way. This is a love story of two people thinking about their future. The scenery vibe and the long drive give the typical romance a sweet gesture. This is a joint effort by legendary singer Mohit Chauhan, the amazing and thoughtful Anvita Dutt, recording engineer Raaj Jagtap, marketing head Akshat Gaur and amazing musicians from Dallas.”

He said the experience with Anvita and Mohit was fantastic. Anvita was amazing to work with, very swift, thoughtful and a smooth process. It took us awhile but we finally had the song recorded. Nonetheless it was a dream to work for Mohit Chauhan. I have a couple of Bollywood single tracks lined up with various artists. And I have a Tamil song which is coming up next as well. And an English track lined up too. We are working on a special project too where we are launching seasons of music. I want to explore Jazz and music in different languages.

Lisa Naveed, the female lead in the song, said, “I’ve been a fan of Mohit Chauhan’s songs ever since ‘Tum Se Hi’ released from Jab We Met. His songs have always connected with me one way or another. Being a part of his song was such a great experience. I never imagined my debut for a music video would be with an iconic artist like him. I felt very connected to Dil Ki Shikayat. Mohit Chauhan’s voice is very soothing and heart touching. It still feels surreal to have worked with him.

When asked how she felt working with Ayaz, the actor said, “I’ve followed his work and his passion for music for almost a year now. Being an independent artist, it is really admirable to see how far he has come in his career. So being able to work with him was an absolute pleasure and quite a learning experience as well. Despite the issue of being in different countries and not being able to travel for shooting; Ayaz and his team really helped in organizing everything on my end. I am grateful to him for being so understanding and easy to communicate with through the process.”

In this time of social distancing, loving someone despite the distance is such a strong feeling, she said, “They say love has no boundaries. But in times like these we can feel very vulnerable of not being able to meet the people we love. So, the time spent with our loved ones should never be taken for granted. It is a blessing to be loved and therefore, we should also give that love to others with all our hearts. Moreover, Anvita Dutt’s lyrics were just a delight to listen to. The whole concept of our song and the way she wrote the lyrics, played out so beautifully. Working with Anvita and Mohit on my first music video project was like hitting a jackpot. Feel incredibly blessed. I could not have asked for a better team to collaborate with, she added.