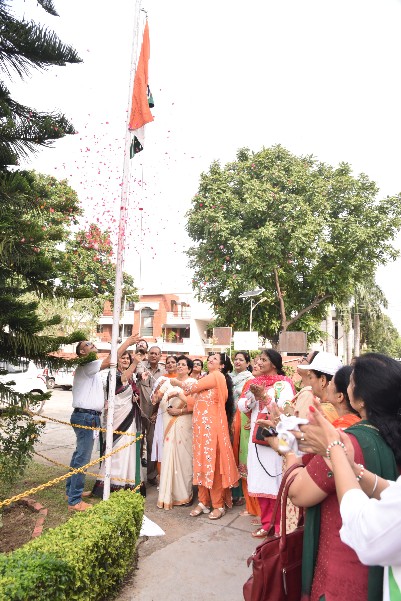 MOTI RAM ARYA SR. SEC. MODEL SCHOOL, SECTOR-27 A, CHD COMMEMORATE Independence Day along with Grand Parents Day celebration with enthusiasm. This time  M.R.A becomes the first school in tricity to host the flag through Drone followed by National Anthem. Flag was hosted by the Principal of the school Dr. Seema Biji who addressed the audience with her inspirational speech later. A beautiful program was organized in the school auditorium in which all the grand parents were honoured by different performances given by MRAites tiny toddlers like fashion show, patriotic dance, rock band and so on. Grand Parents were invited  on the stage to play games they really enjoyed the show and felt important. At the end Chief patron of the school Mrs Shakuntla Mahajan  blessed the students and congratulated the students for Independence Day.