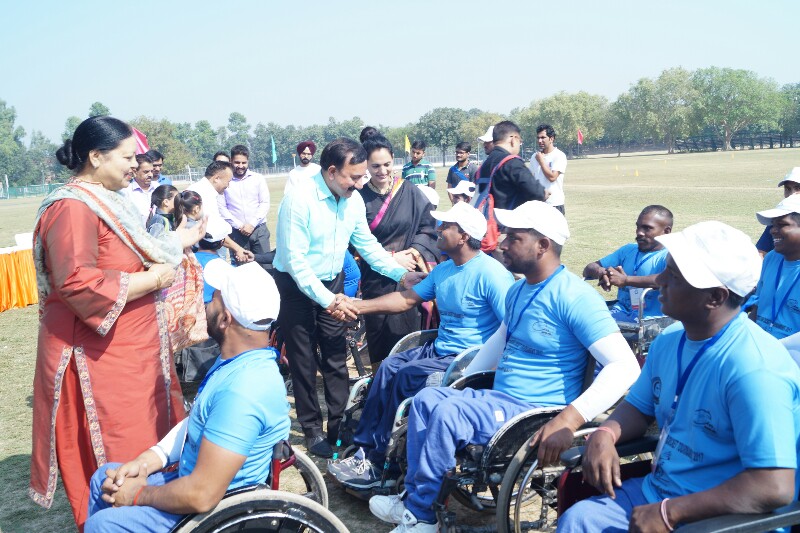 Association of Professional Social Workers and Development Practitioners (APSWDP) in principal partnership with the Rajiv Gandhi National Institute of Youth Development (RGNIYD) announced the launch of a three-day sports event for persons with physical disabilities (PwDs). The event kicked off today at the Panjab University Cricket Stadium, Chandigarh. This inclusive event will take place between 21st and 23rd October 2017 and aim to promote peace and development through sports.

The launch event was attended by Mayor Asha Jaiswal, who was the Chief Guest announcing the cricket match open. Four teams from Punjab, Haryana, Uttar Pradesh and Delhi are participating in this Wheelchair Cricket Tournament.

Speaking at the launch, Asha Jaswal, elected Mayor of Chandigarh said, “The only way for us to create a more inclusive and evolved society in the future is to provide equal opportunities to every member of our community, irrespective of their challenges. I congratulate the Association of Professional Social Workers and Development Practitioners for conceptualizing and creating this innovative new platform that will aim to remove societal barriers for our specially abled friends. I am glad that this tournament is happening for the first time at the beautiful city Chandigarh.”

Rekha Trivedi, Convener of APSWDP said “This event reflects our commitment to achieve celebrate the diversity of our society through sports. We had conceptualized this as a unique experiment in capacity building and leadership development for the socially marginalized community of people with disabilities. We are heartened by the huge positive response that we have received from the participants. Our organization aims to develop a nationwide network of PwDs to participate in Wheelchair Cricket with support of various state networks, sports organizations, corporate and governments in order to promote peace and development through sports.”

The first match was played between UP and Haryana. Haryana scored 88 runs by loosing wickets. However, team UP won with 90 runs at the loss of 2 wickets. Irfan Haider was declared the man of the match. He scored 43 runs in 26 balls. Later, the second match between Delhi and Punjab saw Delhi batting first. Delhi scored 96 runs at the loss of 6 wickets. In this match Punjab won by scoring 100 runs at the loss of 2 wickets. In this match Rohit was declared man of the match by scoring 48 runs in 29 balls. At the end of the day UP and Punjab team won the knock out matches. The team from UP and Punjab will play in the final match on Sunday. Well-known cricketer Dinesh Mongia will be present at the finals.