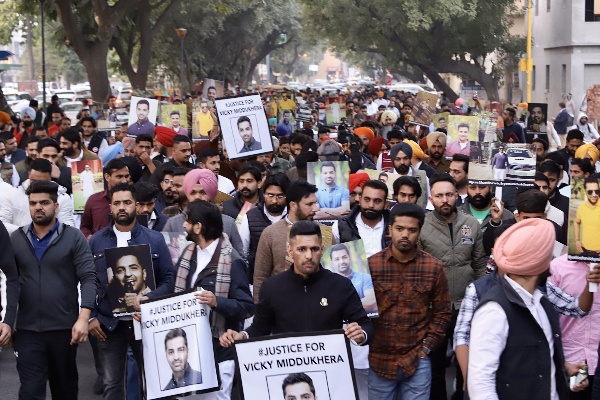 Living in fear and hurt by the inordinate delay in the arrest of culprits, family members, friends and well wishers on Saturday took out ‘Justice March’ which started from Phase 3B2 Market, Mohali, and ended at Amb Sahib Gurudwara, seeking immediate arrest of those behind the killing of Vikramjeet Singh alias Vicky Middukhera. Vicky was a Youth Akali Dal leader highly popular amongst Punjab’s youth & was killed in broad daylight in a cold blooded manner on August 7, 2021 in Sector 71, Mohali, by armed assailants.

A large number of youth, advocates, members of civil society, various NGOs’, retired bureaucrats and others joined the march, holding placards and banners, which read: ‘Justice for Vicky Middukhera.’ The march also formally signalled the start of #justiceforvickymiddukhera campaign on social media.

“We are still hopeful to get justice. We have full faith in the Mohali Police but the delay in nabbing the killers of my brother is quite painful. He was a thoroughly gentle person with no controversy around his personality. Why should anyone kill him? I appeal to the Mohali police from the platform of the ‘Justice March’ to nab the culprits forthwith,” said Ajaypal Singh Middukhera Vicky’s brother.

“We all want the justice process to be expedited for the family of Youth Akali leader Vicky Middukhera. Police must act fast,” said a well wisher of the Middukhera family  who participated in the ‘Justice March’.

“We are with the family of Vicky. They are suffering like anything.  He was a dynamic and young leader, always ready to help the needy,” said another supporter of Vicky Middukhera who  had come to join the march.

Those participating in the ‘Justice March’ claimed that the entire incident was captured on CCTV camera. The day the murder took place, Davinder Bambiha gang claimed the responsibility but the police have not yet been able to reach the culprits, they bemoaned. It is worth mentioning that Gaurav Patial alias Lucky is running Davinder Bambiha gang from Armenia.

“We are overwhelmed with the support of people from all walks of life. We want early extradition of the main accused Gaurav Patial alias Lucky, who is running Davinder Bambiha gang from Armenia. We also want to know who are the main conspirators behind the barbaric murder of Vicky,” added Vicky’s brother Ajaypal Singh Middukhera.

It is pertinent to mention here that an FIR – 0168 – was registered on August 7, 2021 on the complaint of Ajaypal Singh Middukhera by the Mohali Police against unknown persons. However, though the police are investigating the case, the motive behind the killing of Vicky is still unclear, despite the passage of 120 days after the incident. This aspect is responsible for Vicky’s immediate family members living each day in uncertainty and fear.