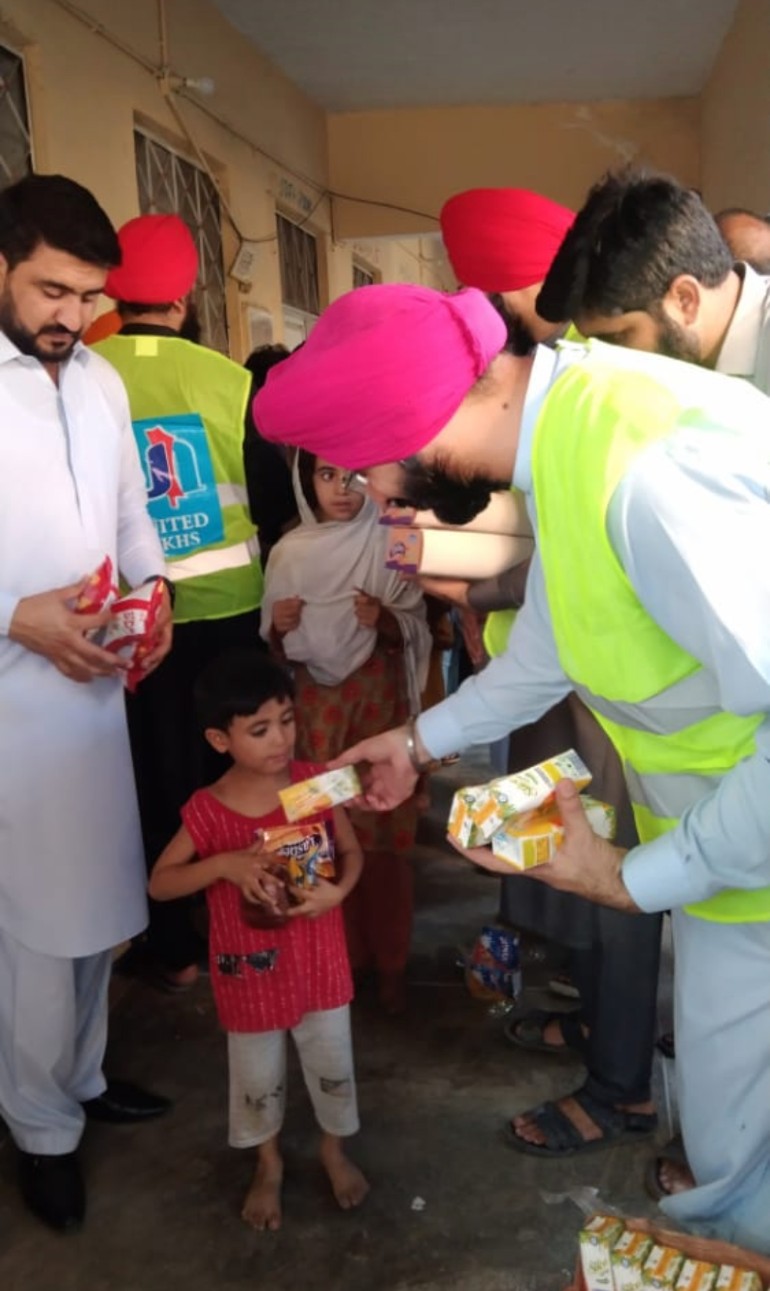 As Pakistan faces the worst floods the country has seen in decades, United Nations has launched $160 million emergency plan for the country, floods affect more than 33 million people.Nightmarish scenes are being witnessed as massive floods wreak havoc and devastation across the country.
UN-affiliated United Sikhs volunteers have stepped up humanitarian aid efforts in multiple locations in the country to help provide emergency aid to the flood affected people.
United Sikhs distributed food and water among 12000 families including children, women, and men in two camps in Charsada district of Khyber Pakhtunkhwa. Nearly 2 lakh people are affected due to flash floods in the district Charsada, 70 km from Peshawar.
Herdyal Singh, Project Director, United Sikhs Pakistan, said, “We have received request to assist 20,000 more families as we responded swiftly to the crisis, deploying teams and resources for emergency relief in the affected areas.”

Due to the massive scale of the floods, several areas still remain cut off as roads and bridges have been destroyed, and communication systems have collapsed. The teams are making every effort to reach and serve difficult-to-access areas as United Sikhs is making efforts to expedite the relief operations in Khyber Pakhtunkhwa, Sindh, Balochistan and Punjab as well, he said.
“While we provide emergency items like milk powder, sanitary pads, food, drinking water, mattress, mats, and non-food items (NFIs), we are also going to set up free medical camps in Nowshera and other districts as the threat of diseases due to water-borne diseases and infections from nearly 8 lakh of carcasses of cattle looms large,” he added. A temple is also under water in Nowshera, a district with sizeable population of Hindus and Christians.
The floods have caused human and livestock casualties and damaged homes and public infrastructure. The National Disaster Management Authority (NDMA) reports that over 2,18,000 houses have been destroyed and 4,52,000 houses are damaged. Nearly 2 million acres of crops and orchards have also been affected.
Due to flooding, nearly 8,00,000 livestock have been killed. Such a huge number of carcasses and stagnant water are causing skin infections, diarrhea, and other diseases, causing an urgent need for medical aid to prevent and control an outbreak. United Sikhs is setting up medical camps to assist the ailing. The floods have destroyed over 3000 km of roads and 145 bridges have been damaged, which is also impeding the delivery of humanitarian aid.

United Sikhs is an UN-affiliated, international non-profit, non-governmental, humanitarian relief, human development, and advocacy organization, registered in 11 countries including the USA, Canada, the UK, Australia, and India. In India, it is registered in Punjab under the Societies Registration Act. It has been conducting projects in order to transform, alleviate, educate and protect the lives of underprivileged, individuals and minority communities impacted by disasters, natural or man-made, suffering from hunger, illiteracy, diseases, or from violation of civil and human rights by fostering sustainable programs regardless of color, race, religion or creed.