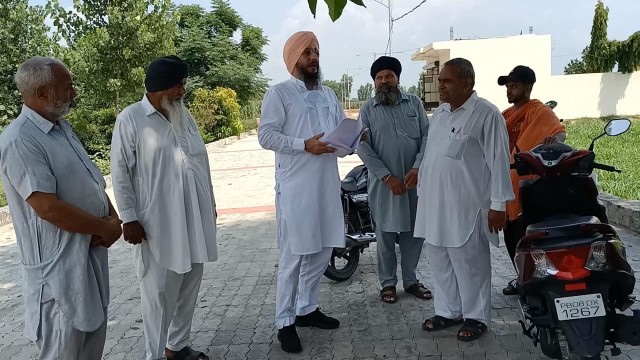 Damanvir Phillaur a Congress leader &  son of Punjab’s former jails minister Sarwan S. Phillaur has launched a unique signature campaign against drug menace in Phillaur, which will be expanded to other parts of Punjab gradually. The campaign has been initiated by Phillaur under Phillaur People’s Forum (PPF) an NGO founded by Phillaur.

“People are so fed up with the drug menace & inaction by authorities to counter the problem that there was no other way but to start a signature campaign by the people for a probe by Special Task Force (STF) into the issue. I am hopeful that this movement will awaken the Punjab government from its deep slumber on the drugs problem which has spread across Punjab like a deadly cancer”, said Damanvir Phillaur.

“The growing menace of drugs in Phillaur region and other parts of Punjab is a matter of serious concern. People want freedom from drugs. Their response to the signature campaign speaks a lot,” added Phillaur, who has been tirelessly fighting against drugs and other mafia operating in Phillaur.

It is noteworthy that the ongoing signature campaign has already covered over 5 major villages of Phillaur sub division and 100s’ of people have signed on the campaign.

Phillaur also referred to the death of Jaswinder Singh, 32, resident of Gohawar, due to drug overdose as there was a syringe lying near Jaswinder’s body. Damanvir said that instead of registering an FIR under relevant sections of IPC against the drug cartel, a case was registered under Section 174 of CrPC.

“Police are either in connivance with the drug cartels or under pressure from the powerful people not to nail the culprit. In such a frustrating situation, the STF probe is the only hope,” he added.

It is worth mentioning that  Phillaur is also writing to Chief Minister Captain Amarinder Singh, demanding a probe into the drug menace by the STF. The missive that will be sent to the CM will be  supported by signatures of people of Phillaur demanding an STF probe.

As per the data of National Crime Records Bureau (NCRB), a total of 864 persons — 709 males and 155 females — died in 29 states in 2018 due to drug overdose. Punjab had recorded 78 deaths due to drug overdose. As many as 87 people committed suicide due to drug or liquor addiction while 13 died of overdose in Punjab in 2019, these shocking figures have been revealed by the NCRB report on ‘Accidental Deaths and Suicides in India-2019.’