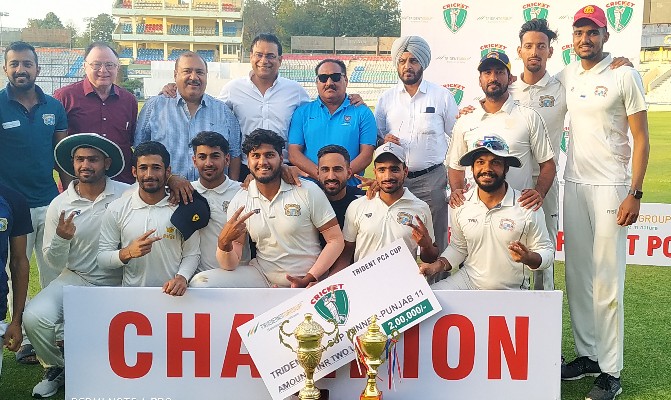 PCA Punjab XI got off to an excellent start with both the openers Prabhjot Singh & Abhijeet scoring centuries and had an opening stand off of 235 runs thereby laying a strong foundation to their teams big total. While batsmen Abhijeet was the first one to go at 100 in 118 balls (10 fours) , Prabhjot Singh kept batting solidly in the company of Abhinav Sharma, who scored a quick fire 27 runs in 13 balls (3 fours and 2 sixes). Batsmen Prabhjot Singh’s 158 runs in 147 balls (15 fours and 2 sixes) helped the team reach a mammoth total of 335 runs in their allotted 50 over’s for the loss of 4 wickets.None of the bowlers of Punjab Red except Ikjot Singh, who captured 3 wickets, could restrict PCA Punjab XI batsmen today.

Chasing the target PCA Rest of Punjab Red suffered an early setback when opener Mandeep Bawa was caught by Parth Agarwal of a delivery by Gurnoor Brar in 6th over when the team’s total was 39 runs. The other opener Vishwa Pratap alongwith batsmen Kashish Pasneja took control of the situation and contributed an important 108 runs partnership for the 2nd wicket when Kashish Pasneja (56 runs in 76 balls) got run out in the 28th over and immediately after that Vishwa Pratap (74 runs in 80 balls) was caught by Ramandeep Singh of a delivery by Gurnoor Brar with the teams total at 148/3. Although Captain Gitanash Khera tried his best with a valiant knock of 82 runs in 54 balls ( 11 fours and 1 Six) to save the match with good support from Sumit Sharma, who scored 38 runs of 28 balls ( 3 fours & 1 Six)  but despite their valiant effort the team folded at 323 all out in the 49.4 overs.

Prabhjot Singh of PCA Punjab XI was declared the Man of the Match.

All won a cash prize of Rs 11000 each. Bhupinder Singh Sr, former International cricket player & member of the organising committee congratulated the players who excelled in the series. He also thanked the sponsors Trident Group for promoting the game of cricket in the region.

Live scores of the matches played in the TRIDENT PCA CUP 2021- Triangular Challenger Series are also available online at https://cricheroes.in/scorecard/1733464/Trident-Pca-Cup-Triangular-Series/Pca-Punjab-11-vs-Pca-Rest-Of-Punjab-Red#SummaryDetail 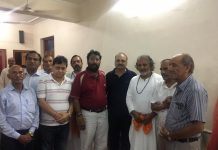 Punjab is among 8 key focus markets for Sensus in India;...

Show HN: ResMaps – See who is viewing your resume are... 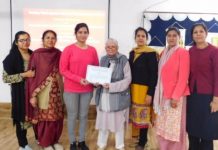