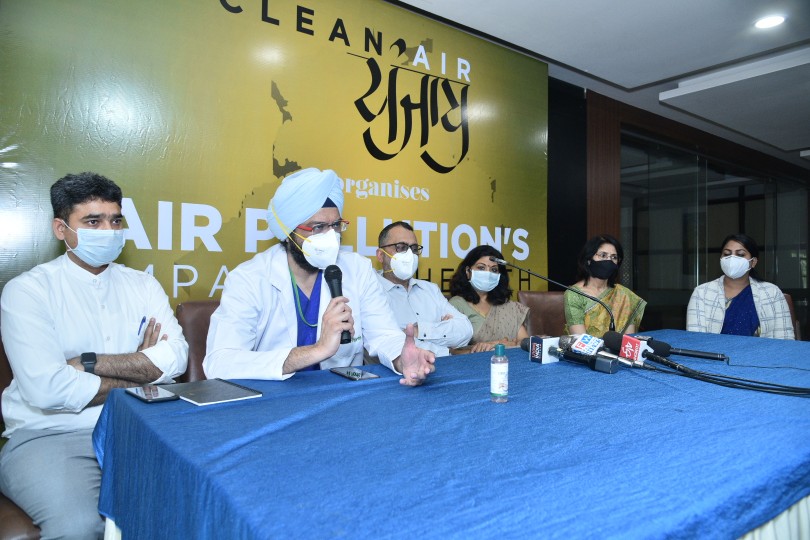 Concerned over the rising air pollution and its severe health impact on the people of Punjab, senior medical practitioners from prominent hospitals of Tricity came together for a health convening held at Chandigarh on April 5.

The convening, which was organised keeping in mind the World Health Day on April 7, aimed at bringing medical practitioners together on a common platform to draw attention to the health cost of air pollution and the urgent need for mitigation. The convening was organised by Clean Air Punjab- a collective of concerned individuals and organisations working on the issue of air pollution along with the Lung Care Foundation and Doctors for Clean Air.

Dr. Arvind Kumar, Chest Surgeon, Founder & Managing Trustee, Lung Care Foundation and, Doctors for Clean Air said that Air Pollution is a serious health hazard affecting our entire country. ‘’With 22 out of 30 polluted cities of the world being in India, the health risk faced by the citizens is immense. Various Indian and Global reports put the number of deaths caused due to air pollution in India in millions. This figure, however, does not take into account the million others who are living with severe respiratory problems, heart problems and other diseases all attributed to their exposure to air pollution. It is the doctors who see this impact first hand in their everyday practice. It is therefore imperative for the medical professionals to come forward and take up an active role in mitigating the health impacts of air pollution, through educating their patients, people, collaborating with the local authorities and organizations to take measures at the community level to identify the sources of air pollution and take actions to cut the emissions at source.”

Prof. Priti Arun, MD-Psychiatry, Joint Director-GRIID, Chandigarh, said that there was scientific research that pointed towards environmental pollution impacting the physiology of human beings in such a way that there is a higher prevalence of common mental disorders like depression and anxiety. “They also have more predisposition to have a recurrence if pollution continues. Even serious effects like cognitive functions and psychosis are seen more often when people are exposed to pollution. In children higher prevalence of Attention deficit hyperactivity disorder with exposure to large particulate matters and nitrogen dioxide is seen,” she shared.

“With over 4.2 million deaths per year, ambient air pollution continues to be ninth leading cause of cardiopulmonary deaths in world. In India, indoor air pollution also poses threat accounting for over 2 million deaths, 44% due to pneumonia, 54% due to COPD and 2% due to lung cancer. Children, adolescent, women and elderly are the vulnerable group for respiratory morbidity and mortality,” said Dr Zafar Ahmad, Senior Consultant, Department of Pulmonology, Sleep and Critical Care Medicine, Fortis Hospital, Mohali.

Dr. Vanita Gupta who is President of, Indian Medical Association, Chandigarh, highlighted that air pollutants damage the skin by inducing oxidative stress. “Though human skin acts as a biological shield against pro-oxidative chemicals and physical air pollutants, prolonged or repetitive exposure to high levels of these pollutants may have profound negative effects on the skin. Exposure to ultraviolet radiation has been associated with extrinsic skin ageing and skin cancers,” she said.

Dr. Diljot Singh Bedi who is Consultant Paediatrics and Neonatology said ‘’Every day around 93% of the world’s children under the age of 15 years (1.8 billion children) breathe air that is so polluted it puts their health and development at serious risk. Tragically, many of them die: WHO estimates that in 2016, 6 lakh children died from acute lower respiratory infections caused by polluted air. These children are innocent bystander victims of our misadventures.’’

The doctors on the panel said that this convening also provided them with a platform to call for support from other doctors across the country, which will help in strengthening the network of regional doctors across India as every city in India was impacted by air pollution.

According to a recent Greenpeace report over 120,000 people died in India in the year 2020 as a result of Air Pollution and its related problems. Increasingly it’s becoming an accepted fact that the rising air pollution is leading to a serious public health crisis all across the country, which is not only impacting our economy but also our day-to-day living.

The convening was held at the Press Club following all the Covid 19 protocols.

“Air pollution accounts for almost 1 in 10 deaths in children under five years of age. It makes children vulnerable to the risk of chronic lung and cardiovascular disease, Cystic fibrosis and increases the chances of hospitalization and ICU admissions.’’-Dr Reena Jain, MD-Paediatrics.

“While all children are vulnerable to air pollution, children with intellectual and developmental disabilities (CwIDD) are most at risk. The World Health Organization (WHO) estimates that every year, 2.4 million people die because of the effects of air pollution on health.”-Dr Wasim Ahmad (PhD Intellectual Disability)

‘Mental illness is not a choice but recovery is’