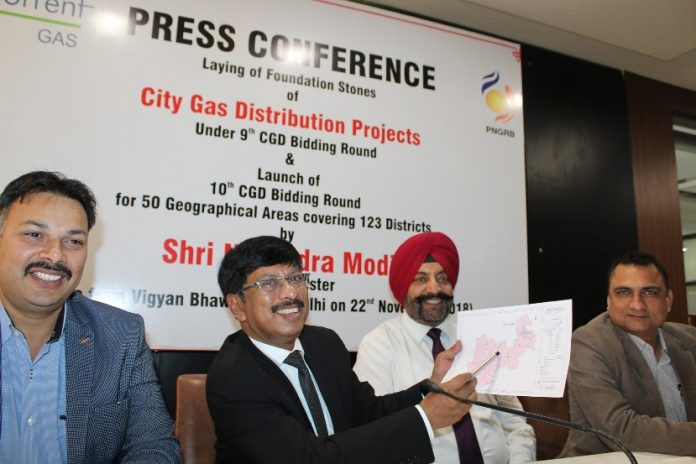 On 22nd November,2018, Hon’ble Prime Minister Shri Narendra Modi will lay the foundation stones for City Gas Distribution projects in 63 Geographical Areas across India, including three in Punjab, heralding the availability of convenient and environment-friendly natural gas for residents.

The foundation stones for the GAs, awarded by Petroleum & Natural Gas Regulatory Board (PNGRB), will be laid by Hon’ble Prime Minister at a programme in Vigyan bhawan in New Delhi in the presence of Hon’ble Minister of Science & Technology, Earth Sciences and Environment, Forest & Climate Change Dr. Harsh Vardhan, Minister of Petroleum & Natural Gas and Skill Development and Entrepreneurship Shri Dharmendra Pradhan and other dignitaries.

At present, CGD authorization has been given for 92 GAs covering 129 districts (99 complete and 30 part) spread over 23 States and UTs. These cover about 20 percent of India’s population (as per 2011 census) and 11 percent of its geographical area. In addition, CGD operations are being carried out in 5 districts.

PNGRB had launched the 9th CGD Bidding Round in April 2018 for the 86 GAs which includes 174 districts (156 complete and 18 part), spread over 22 States and Union Territories (UTs). After the evaluation of bids, Letters of authorization for development of City Gas Distribution (CGD) projects in these GAs have been issued to 23 entities.

With the completion of 9th CGD Bidding Round, natural gas would be available in 178 GAs comprising 290 districts (278 complete and 12 part) spread over 26 States and UTs covering more than 46 percent of India’s population and about 35 percent of its geographical area.

As per the commitment made by the various entities in the GAs, authorized for development of City or Local City Gas Distribution Network under 9th CGD Bidding Round in Punjab, 13,57,664 domestic PNG connections and 152 CNG stations would be installed largely during a period of eight years up to September, 2026, in addition to 5,125 inch-km of steel pipeline. Further, the entities would be authorized to supply natural gas to industrial and commercial units in their respective GAs as per the limits provided in the CGD Authorization Regulations.

Torrent Gas Private Limited (TGL), a part of the Rs 18,500 crores Torrent Group has won the bid for SAS Nagar district (except areas already authorised), Patiala and Sangrur Districts. TGL plans to make an investment of Rs.1,500 crores in the GA in order to release 5,20,200 domestic PNG connections, set up 54 CNG stations and lay 2,610 inch-km of steel pipeline.

This month, PNGRB launched the 10th CGD Bidding Round for 50 GAs spread across 14 states. This would increase coverage of city gas distribution to 70% of the country’s population and 53% of its area.

The GAs in Punjab included in the 10th CGD Bidding Round are Sirsa, Fatehabad & Mansa (Punjab) Districts (this GA includes areas in Haryana also), Firozpur, Faridkot and Muktsar Districts and Hoshiarpur & Gurudashpur Districts.

Torrent Gas is a part of the Rs 18,500 crores Torrent Group, one of the leading brands in India, which is committed to its mission of transforming life by serving two of the most critical needs – healthcare and power. Torrent has recently forayed into City Gas Distribution business to meet another critical need, i.e. natural gas which is an environment friendly fuel.

Torrent Gas, one of the leading companies in the CGD sector, has authorisations to create CGD network in 23 districts spread across 7 major States in India. 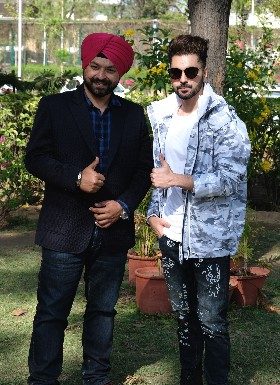 From dancing beats to soulful voice, B Jay Randhawa’s song ‘By God’ has it all

Government Employee’s passion turned him into a Singer, thanks to Music Composer Ranbir Kumar