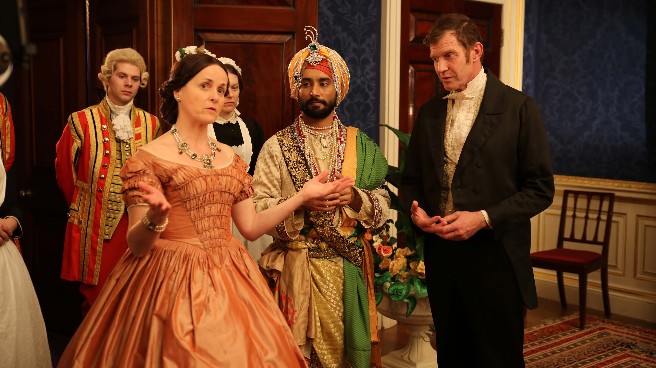 Known for its crossover entertainment, Uniglobe Entertainment is releasing its UK’s blockbuster “The Black Prince” digitally around Vaisakhi on 10th April 2018. The movie is based on well-defined pages of Maharaja Duleep Singh’s story accomplishing the history of Punjab wisely.
Narrating the true story of India’s greatest King, the movie stars Satinder Sartaaj and Shabana Azmi have played a role for 150 years old story, where a man is connecting his real identity with a faith. “Before the beginning of a shoot, I was thrilled as I come to know about my role. But now, I am really excited for the movie’s release on digital platforms after a great succes in UK”, said Satinder Sartaaj while sharing his incredible experience in the movie.
Born to a prestigious and royal family in Lahore, Maharaja Duleep Singh was forced to live as a Christian in Victorian England. Such history needs to be viewed by everyone, especially youth. The movie will catch the glimpse in April letting Sikhs worldwide to know their familial’s sacrifices and pride. With this thought, the movie’s executive producer, Jasjeet Singh said, “I felt this story needs to be told because our children do not know much about the Last King of the Sikhs – Maharajah Duleep Singh. We should realize his efforts to regain his Kingdom that eventually resulted in a Gadar Movement and the contribution of Sikhs in Indian Independence. This is a missing chapter in Indian History too.”
Kicking off the promotions in large, the movie will be available in English, Hindi,and Punjabi. The director, Kavi Raz is elated with Uniglobe’s choice and said “Vaisakhi seemed to be the perfect time to present this film to every Sikh worldwide because Vaisakhi celebrates Sikh heroism and that is what THE BLACK PRINCE does.”
The Black Prince is produced by the Firdaus Productions and Brillstein Entertainment Partners in Hollywood, which will be released after the partnership with SAGA of India handling the Punjabi and Hindi release. Commenting on the partnership, Namrata Singh Gujral, President of Uniglobe Entertainment says, “Vaisakhi commemorates the formation of the ‘Khalsa Panth’, under Guru Gobind Singh Ji, after the execution of Guru Tegh Bahadur Ji for refusing to convert to Islam. When I watched the film, I had tears in my eyes. As a Sikh, I felt honored to bring the story of Maharajah Duleep Singh to Sikhs worldwide so our children can learn how our Sikh community of warriors has consistently fought and risen against religious intolerance and the persecution of Sikhs.”
One can easily watch the movie on Amazon, ITunes, Google Play, Fandango Now, Sony Playstation and Microsoft Xbox after the release. Further, President Namrata Singh talked about her next project based on 1920s Sikh immigrant story where Nargis Fakhri and Satinder Sartaaj will be on lead role. The project is collaborated with the executive producer, Jasjeet Singh.
Well, the stars Sartaaj and Nargis were seen in a recent Punjabi song- “tere vaastey”, released a week ago.

SP Chauhan: The Struggling Man’s trailer is out and we can’t...