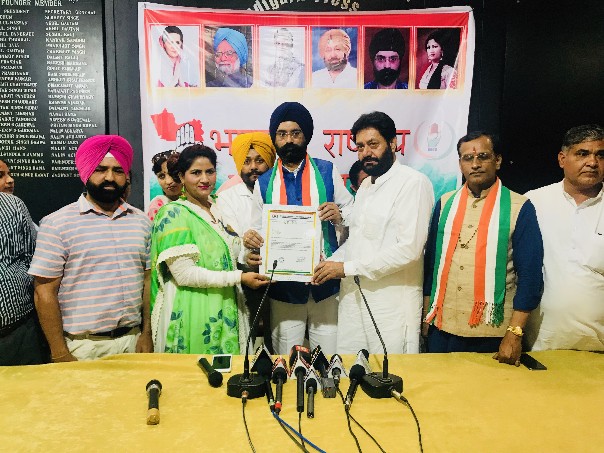 Today at Chandigarh Press Club, National Congress has given the title of state president of art and culture to the famous film actress Tejinder Kaur Sandhu alias Teji Sandhu . On this occasion, Manjeet Singh Kalsi (President National Congress Indian National Congress Barricade) has given the appointment letter of State President to Madam Tejinder Kaur. At this moment, Mr. Gurjeet Singh Aujla (Member Parliament), Madam Navjot Kaur Sidhu (former Health Minister), Dr. Jaswinder Singh Sandhu, Bunny Sandhu (OSD Navjot Singh Sidhu), Preet Inder Singh Dhillon (Senior Congress Leader Majitha, Amritsar), Jarnail Singh (Ex DSP, Vice President DCCC, Amritsar) and other Congress leaders were present.
On this occasion, Tejinder Sandhu said that she would demand a subsidy from the Punjab government on the shooting of Punjabi films and assured them in other serious matters, such as the action to be taken on the casting couch, would be under the leadership of the state president. She also said that the demand for a pension will be placed before the government, as the artists serving mother tongue have become older and have no other means of income. Religious films will be supported by the government’s.  Teji Sandhu will take the mother tongue to new heights and serve it all the time.