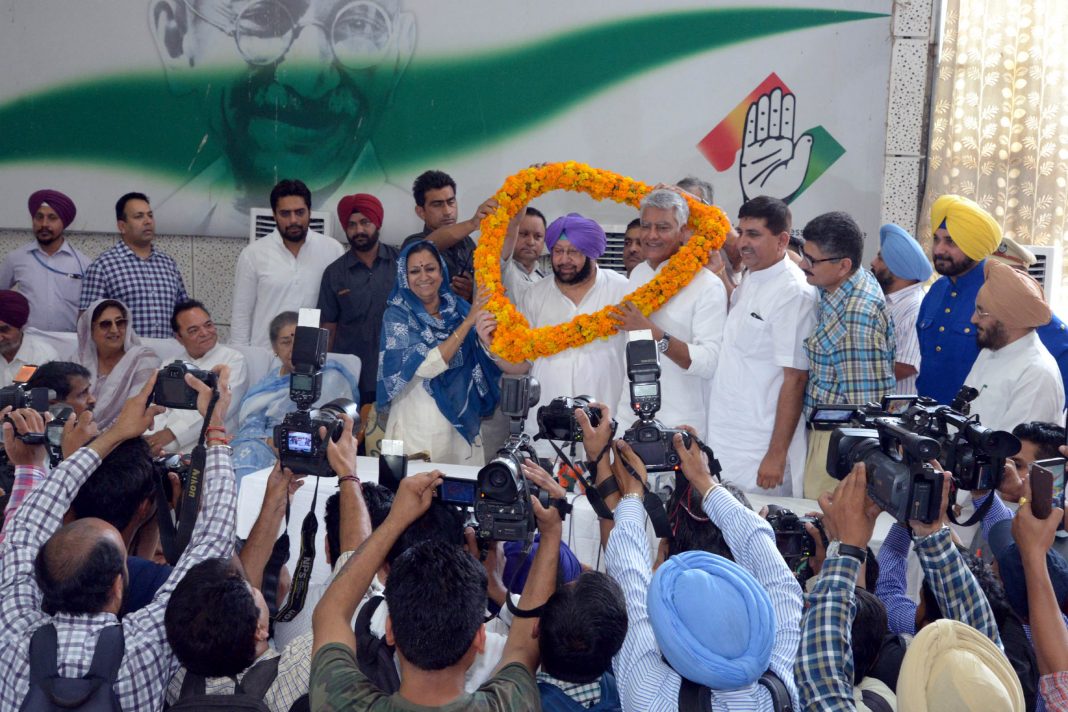 Senior party leader Sunil Jakhar on Wednesday formally took over as president of the Punjab Congress with the promise to ensure fulfillment of all party promises to the people in a healthy political environment, where the party workers and foot soldiers act as the government’s ambassadors disseminate its messages and programmes among the people.

Congratulating Jakhar on the occasion, the Chief Minister said he was the best person to strengthen the party and help the government fulfill all promises to the people of Punjab. He urged party workers to pull up their sleeves for the upcoming municipal corporation elections in the state, pointing out that the civic bodies were in a mess and needed to be revived for the welfare of the people.

The Akalis had ruined Punjab, which was reeling under unprecedented debt to the tune of Rs. 2.5 lakh crores, as against Rs. 1.3 lakh crore estimated earlier, said Captain Amarinder, warning that his government would deal strictly with all those responsible for bringing the state to the brink.

Describing Sunil as an honest person and speaking about his close association with the family, the Chief Minister assured the new PPCC chief of full support of the government in the implementation of all party promises. All party workers found delivering on the promises would be suitably rewarded, he added.

Accusing the Akalis of politicizing the entire administration and the police, Jakhar said, soon after taking over as the party chief, that there was jungle raj under the previous regime and the Congress workers would act as watchdogs to ensure that the rule of the law prevails in the state.

The Congress workers would take the government agenda to the people and get their feedback in order to ensure smooth functioning and redressal of people grievances, he said, adding that the Captain Amarinder government stood for the people, unlike the SAD regime which worked only in the interest of the Akalis.

Thanking AICC vice president Rahul Gandhi and the Punjab chief minister for reposing faith in him, an emotional Jakhar earlier said he was touched by the great responsibility and opportunity given to him despite his recent electoral defeat. He was, however, quick to caution that it was not time for celebration but to take stock of the party’s strengths and performance in order to ensure that the promises made to the people are fulfilled in all earnestness.

Formation of the Congress government in the state was only the first step and the party faced a long battle ahead, said Jakhar, exhorting Congress men to pull up their socks. A positive beginning has been made, said Jakhar, referring to the flawless procurement of wheat, the formation of a commission to review false cases and the successful efforts in breaking the backbone of the drugs mafia.

Recalling his long association with Jakhar and his family, Lal Singh earlier lauded the new PPCC chief’s contribution in raising vital issues of concern to Punjab during his tenure as CLP leader. Harish Chaudhary said the appointment of Jakhar would strengthen the organizational structure, while Asha Kumari terms his appointment as a new chapter in the Congress history. Ambika lauded the PPCC leadership for steering the party’s victory in the recent state assembly polls.