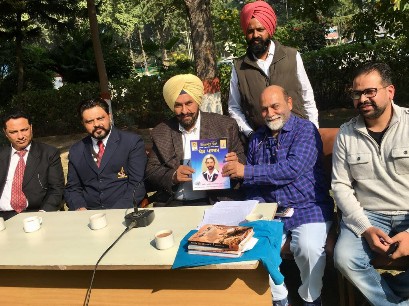 Six sports personalities would be awarded during the 27th Kamaljit Khedan 2017, to be held at village Kotla Shahia near Batala (District Gurdaspur) on December 10, 2017. The names of these personalities were announced by Prof Gurbhajan Singh Gill, Chairman, Surjit Sports Association, at a press conference held at Chandigarh Press Club, here today.

While addressing the press conference here today, Chairman Prof Gurbhajan Singh Gill informed that 27th Kamaljit Khedan 2017 would be organised at village Kotla Shahia, near Batala (District Gurdaspur) from December 7-10, 2017 and these six sports personalities would be honoured at the award ceremony taking place at 1 pm on December 10, 2017 at Surjit Sports Complex, village Kotla Shahia. These sportspersons would be awarded with a cash prize of Rs 21,000 each along with a citation and a trophy. During this 4-day long mega sporting event, more than 1500 sportspersons from different states of North India would compete against each other in eight different sports disciplines such as Athletics, Football, Hockey, Volleyball, Netball, Kabaddi National Style, Kabaddi Circle Style etc. He informed that www.babushahi.com would be the media partner for this event.

It is pertinent to mention that Kamaljit Khedan is the only mega sporting event of the country where books worth more than Rs 1.5 lakh are given to winners as prizes along with cash prizes. Prof Gurbhajan Singh Gill informed that the main aim of giving books as prizes is because along with sports culture, the Surjit Sports Association also wants to promote book culture in the state.