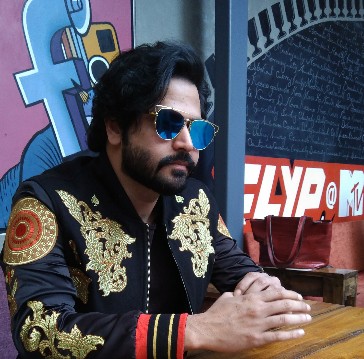 Singers and lyricists are mostly afraid to disclose their songs by the fear of getting them copied. But I am not scared to sing my newly composed songs infront of anyone because I know I have the calliber to write as many new compositions as I want to, says Singer Alfaaz.
Alfaaz interacted with media before his performance at Flyp@MTV, Chandigarh. He shared his reason to be away from this industry from a long time. He told, “My lowest point came when Yo Yo Honey Singh became ill. And that’s what broke me internally and this was the only reason I stayed away from industry. Now when Yo Yo Honey Singh is back again, I am also coming with a new project. I am doing a movie Wadda Kalakaar whose shooting will start in January 2018. You will get to see me and Yograj Singh in the lead.”
Further he said that Yo Yo Honey Singh is my Big brother and he always inspire me to take my career seriously. Audience has lot of misconceptions about Yo Yo Honey Singh. He is very down to earth person and he has a clear vision. He once told me that I will never go to Bollywood and struggle for my space. Rather Bollywood people will come to my studio in Delhi. When this actually happened, I was stunned to see how his vision came real.
Yo Yo is so dedicated to his work that he was making music while he was ill. This quality of Yo Yo inspires me so much. I hope people will give him the same love again they have given him before.

Party enthusiasts in the city-beautiful were in for a treat when Punjabi singer Alfaaz performed at Flyp@MTV Café in Sec-26, Chandigarh. Guests were seen dancing to the desi Punjabi beats and enjoying the evening as sensational Punjabi Singer Alfaaz belted outcrowd’s all-time favourite songs like “Yaar Bathere” , “Rickshaw”, “Haaye Mera Dil”, “Putt Jatta Da”, etc. The rhythmic night had Alfaaz infusing Punjabi beats and romantic songs that captivated the audience.

“The amazing and supportive crowd at Flyp@MTV Café has truly made this a memorable night, I always love performing for the people of my home-town.” said Alfaaz in a conversation.