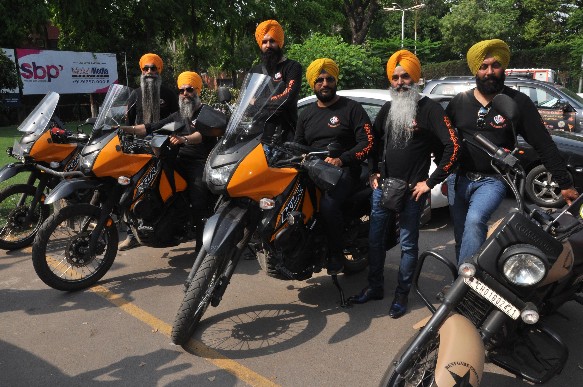 Six intrepid Sikh motorbike enthusiasts, from Sikh Motorcycle Club(BC), Canada, have successfully completed a world tour on motorcycles. The ambitious journey was undertaken by them from Canada to Punjab which passed through 22 countries. It is pertinent to mention that Sikh Motorcycle Club, Canada was founded in 2003 in , British Columbia, Canada, after a lot of struggle and a protracted legal battle, initiated by Avtar Singh Dhillon with the support of community members. This had to be done in order to get permission for Sikhs to wear turbans while riding motorbikes. The club since then has come of age and now is an example of preservation and propagation of the Sikh identity – a part of which is donning of turbans in accordance.

The riders along-with 4 members of the club interacted with the media at Press club here, to share details about the epic journey, which has already earned the club a name in Book of records, London.

“We undertook the long and challenging road journey from Canada to Punjab on motorbikes to showcase to the world what Sikhism stands for and make the international community aware about the Sikh identity. The idea was also to remove any confusion that people in different parts of the world may have, which at times leads to equation of Sikhs to members of the Arab world.” Said Azad Singh Sidhu, who was part of the expedition.

The riders got legal clearances, did the heavy paper work needed for the world road trip, and kicked off by first crossing Canada and USA by road. The group then took a flight to England. From here on, the bikers hit the road with the aim of reaching India(Punjab) in less than 40 days. The arduous ride which started on April 3 culminated in Punjab on May 11.

“Guru Nanak Dev Ji’s’s 550th birth anniversary celebration is on and this was the best time to undertake this ride. The underlying message of the voyage was to recognize the entire human race as one, which was the main teaching of Guru Sahib.”Said Jatinder Singh Chauhan, another adventurous Sikh motorcyclist.

“We want the entire world to know about who Sikhs are, and their contribution to helping those in need. In keeping with this objective, we collected donations during our journey. The amount will be handed over to Khalsa Aid International.” Said  Mandeep Singh Dhaliwal, a Sikh motorcyclist.

“The tour took us through countries and cities across Europe before we entered Turkey from where we traveled via Iran to enter Pakistan. In Pakistan, we went to Nanakana Sahib – Guru Nanak Ji’s birthplace. We then crossed the border through Wagah and finished the International leg of the tour at the Golden Temple, Amritsar.” Said Pravjit Singh Takhar, another Sikh motorcyclist.

“The team then embarked on the Punjab segment of the ride from Amritsar. We went to Sultanpur Lodhi via Goindwal Sahib and  Khadhoor Sahib to complete the tour. All these places are associated with Guru Maharaj” Said Sukhvir Singh Mlait, a Sikh motorcycle rider.

The ride from Khadoor Sahib to Sultanpur Lodhi was unique. Baba Sewa Singh, the well known environmentalist called this part ‘Chetna march’ and as many as 550 motorcyclists joined the 6 riders from Canada in keeping with the 550th anniversary of Guru Nanak. Not just this Baba Sewa Singh got 6 tree saplings planted by the riders from Canada as part of his overall initiative of planting 550 trees.

Jasmeet Pal Singh, a team member who completed the both physically and mentally grueling bike ride said, “An important message that we want to sound through this endeavour is that of a drug free Punjab.”