Home Entertainment Roadies is back with Xtreme season, Gang leaders in Chandigarh for X... 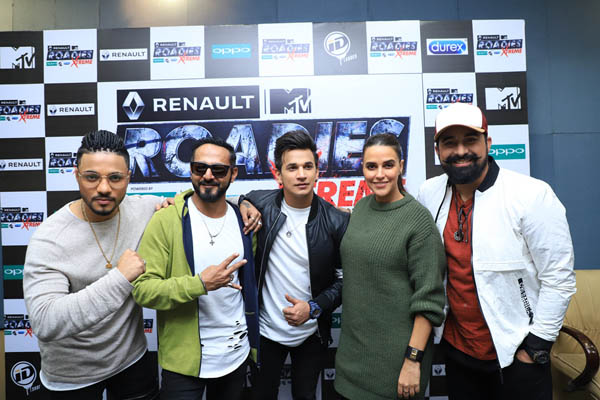 MTV, the voice of the youth is back with the country’s longest running reality show’s fifteenth and most XTREME season ever, Roadies Xtreme. Bringing in a tinge of adventure and surprise for the audience and gang leaders, original Roadie, Rannvijay Singha will be ushering in the ‘unexpected’ this time around. To determine who gets to be in their gang, adventure squad – Girl Boss, Neha Dhupia, Indian Television’s heartthrob, Prince Narula, seasoned Roadies judge, Nikhil Chinapa and first time gang leader,Raftaar enabling aspiring Roadies to embark on the most exciting and adventurous driving sojourn of their lives.

Chandigarh has time and again given the country some of the most competitive contestants on Roadies and this time around too the Roadies squad flew down to the city for the most extreme season. As always, the true Chandigarh spirit did shine through while the contestants turned out in huge numbers for the auditions. Heating up the Chandigarh winters, contestants left no stone unturned to impress the gang leaders with their effervescence and enthusiasm.

Commenting on the most extreme season of India’s cult reality show, Ferzad Palia, Head – Youth, Music and English Entertainment, Viacom18 said, “It’s the 15th season and yet it feels like the first. The excitement of the fans that leads up to the auditions is contagious and this drives us to make every season the very best. This year the show is going to be extreme in every aspect and if there is one thing the Roadies fans expect, it’s the unexpected. We are thrilled to be in Chandigarh city, a city that lives and breathes the Roadies spirit and are confident to find some interesting contestants for the show this year from this city.”

Speaking about the new season, the original Roadie, Rannvijay Singha: “As the name suggests, this time Roadies will get extreme and the audience will be in for a major surprise for sure. My role won’t be that of a gang leader, but that of somebody who will be bringing in twists and turns at every level possible. I have been associated with the show for 15 years now and do know what it takes to be a Roadie and a gang leader and also what it takes to win as a roadie and a gang leader. Right from the auditions to the journey, I will be making sure that the contestants and gang leaders, both face xtreme challenges and emerge stronger than ever”.

Neha Dhupia, who will be returning for the third time on the show, said “Roadies is a cult show which is part of every youngsters life in the country. Personally, I am very intrigued by the concept of the show and I love the passion that the contestants emanate, their dream to become a roadie and willingness to do anything to achieve that. That spirit, to me, is phenomenal. Every year through Roadies we hope to present some inspiring and passion filled journey’s and this year as well we aim to do the same. Apart from all the hard work, I am looking forward to pushing the limits and living upto the name of the season… EXTREME!

Roadies prodigy, Prince Narula said, “Roadies is my alma mater. It was a great kickstarter for me and owe it all to Roadies! When I was first approached to be a gang leader on Roadies, I felt like life had come full circle for me. My main aim is now to win the show and this time around I will make sure to strategize better and fight it out with full force. I will ensure that my gang wins Roadies Xtreme!”

Explaining his views on the new season, MTV VJ Nikhil Chinapa– “Calm, composed and motivated – as gang leaders, that’s what we’re expected to be on Roadies. However, when the hammer drops, calm and composed, both fly out of the window! In the upcoming season I am excited about choosing my own gang members and motivating them to win the show. They say this is going to be an Xtreme season but with all the other gang leaders and gangs being just as competitive, what else did we expect Roadies to be?”

Watch What Gang Leaders Neha, Prince and Nikhil has to say about this new Season:

First time gang leader, Raftaar, said, “I have been watching Roadies for years now and when I was approached by MTV to be a gang leader on the show, I could not resist but say yes. I have heard that this time around there is a major change in the format of the show where gang leaders will get a taste of what it feels to be a contestant on the show. I am more excited about that. i have always been a huge adrenaline junkie and I cannot wait to kickstart this journey.”

Roadies Xtreme has gone all out with its promotional activities by leveraging all the platforms through an extensive 360 degree campaign. The Chandigarh auditions were held on 16th December with the day starting with group discussions being followed by one- on- one interaction with the gang leaders. The auditions were filled with an abundance of excitement and more horsepower than ever!

Discover the true Roadie within you and join forces with your favourite gang leader on the ultimate road to success with the all new, Renault MTV Roadies Xtreme!