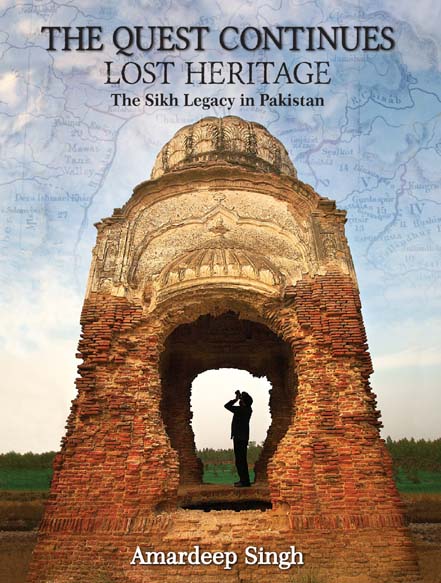 The book is a seminal work in documenting the extensive legacy of Panjab’s heritage in Pakistan, which ex-American Express executive Amardeep Singh has painstakingly chronicled in his coffee books.

His first book took him four years of research and 36 days trip into Pakistan which he travelled, exploring the hitherto forgotten monuments of Indian rich culture and photographed them.

The second book “The Quest Continues…” was completed in just 9 months and 9 days, says Amardeep Singh, for which he travelled to Pakistan for 40 days from Balauchistan to Peshawar to Sindh and discover forgotten facets of the Indian culture, Amardeep said.

The first edition of the 500 page illustrated book went into four reprints and was widely accepted by diaspora, and has been accepted by world’s leading libraries in US, Canada and Singapore.

These are not the books but my rich experience to showcase and make the younger generation understand the richness and diversity of culture and how the people living across the border are so closely connected with their roots as human beings, he remarked.

Though the first book is priced at Rs.3999 while the second one is around Rs.5,000, the said part is that Panjabis would spend that much amount in a restaurant in the evening but would not spend to buy the book for their children to share this knowledge, he lamented.

He shared as to how the people in Sindh and Balauchistan still follow Nanakpanthi where all religions congregate and the practice is into Nanak’s teachings and they follow Guru Granth Saheb in their lives.

During the 15th century, Sikh philosophy emerged as a reformist movement in the north-west of the Indian subcontinent. Over the next two centuries, it evolved as a defense cohort against oppressions of those times. In the early 18th century, this movement grew stronger and successive decades saw the rise of an indigenous kingdom as the bulwark against foreign intrusions. By the 19th century the Sikh kingdom became the custodians of the Punjab and established a strong secular rule.

It was such a formidable empire that the fast-expanding British East India Company which had acquired most of India was firmly stalled on the banks of the river Sutlej from further westward advances.

Seven decades after the searing partition of 1947, the Sikhs visiting Pakistan today have limited their interests to the realm of religion and remain uninterested to explore beyond the few functional gurdwaras.

Gurmeet Choudhary gets emotional at the trailer launch of PALTAN!