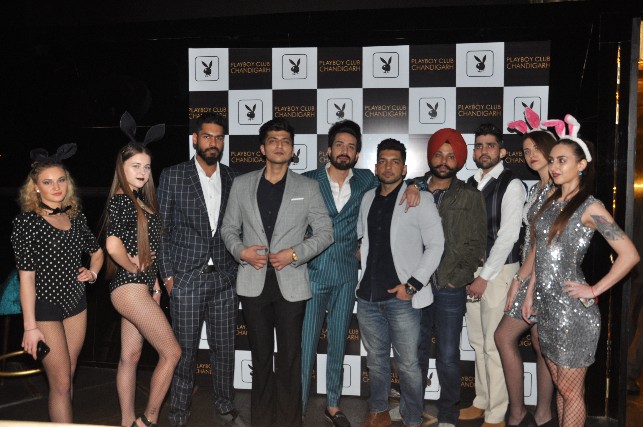 Those who said that there is no night life in Chandigarh now need to think twice, as the party culture in tricity & the region is set to witness global party trends. The reason: Playboy Club the world’s leading night club destination has been unveiled in Chandigarh, at City Emporium Mall, Industrial Area Phase I. Spread over a carpet area of an expansive 10000 sq feet, this is the fifth Playboy Club in India which is all set to unleash top of the line clubbing facilities. So get ready to turn up the volume and jive to original club music.

An exclusive preview of the property was organised for media in which 6 young promoters who have kick-started the venture on a franchise mode under the banner of Tricity Hospitality were present. Nikhil Verma, a young entrepreneur initially brought Play Boy Café to Chandigarh.  Then two more youngsters Karan Singh and Summer Sidhu joined Nikhil and all together then thought of bringing  Playboy Club instead of café. To achieve this dream the team became bigger and was joined by Shubham Gupta, Mehnaz Sidhu and Prabhjot Aulakh.

The concept and USP of the night club was shared with media by all the young promoters and  Sahil Joshi who is the unique property’s GM(Operations). The event also saw famous Playboy Bunnies – posing for the media in the background of the club’s plush interiors.

Sahil Joshi said,”The world’s hottest night life party destination Playboy Club has entered the city. This has brought Chandigarh on the International party circuit map. We have created a pleasing ambience which has been accentuated by use of attractive golden and black hues in the interiors. We will also have the popular and almost iconic Playboy Bunnies -who will be international models and  part of the hospitality at the club. When you step into Playboy you get the feel of  a real international nightclub. The place has been designed to make guests feel special and separate areas have been demarcated for them in accordance with facilities.”
The club has three different sections for the guests to feel very special. There is a Regular area, then there are the VIP & VVIP areas. What’s more, the place houses a ‘Key Room’ for Royal clients replete with a private bar and DJ.
A section has the black wall background covered with a number of nostalgic Playboy photo archives, this gives the club a vintage look. As soon as you shift your eyes to the adjacent wall, you will get awestruck by the beautiful artwork of ‘The iconic Bunny Ears’ signs done over a black wall backdrop along with a combination of pictures and typography, which depicts the history of the club. The pictures show the chronology  of the Playboy brand and also shows details of its entry in India. The club’s interiors have been embellished with  chandeliers which are luxurious & impressive.
Playboy is one of the most famous night club brands in the world. With clubs in Chicago, Las Vegas, New York, Macao etc now the prime property has come to Chandigarh. Playboy Chandigarh is the tricity’s and in fact the region’s first international night club brand fully equipped with updated, surrounding sound and lights. In fact the place prides itself on setting up a first in the north region – a unique UFO-Fibre Optic lighting system; which is also the second in India. Playboy in Chandigarh has big LED walls , state of the art laser lighting, a huge dance floor ,music, drinks, food, security, with some of the best international and national DJs’ who will be performing  live from time to time.
Playboy offers one of a kind signature dishes and drinks. Some unique  culinary delights on offer are Malai Brocolli , Toffu Three paper Bomb,  Babri Seekh Kabab  Chukandari Jhinga etc. The Playboy platters are a must try. Playboy’s Sushi collection is the best and the club is known for this offering. The club has the tallest bar in tricity, which is well stocked and immaculately designed. Party lovers have options to pair the food with some heady signature drinks like ‘Blonde Bunny’, ‘Queen of Playboy’ and ‘King of Diamond’ which among others  are worth a try.
The young promoters announced that a launch party  is going to be held on 28th February in which well known Indo Canadian Punjabi singer PropheC will perform and then TeriMico (International artist female DJ) and Kalpnik Bass will entertain the guests on 29th of February.

Lock them up or lock them down… The queens don’t forget...