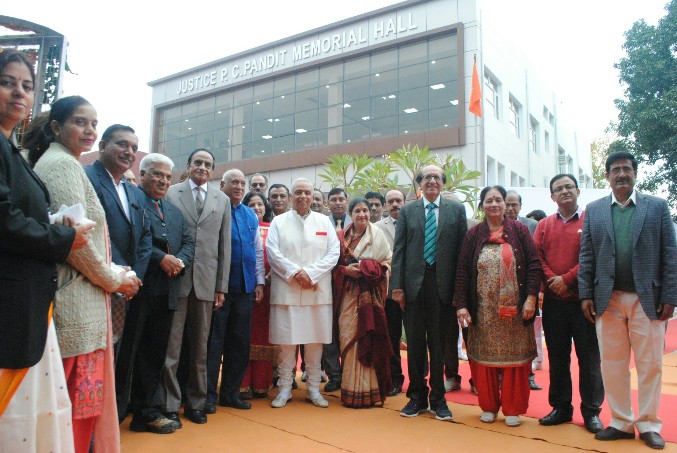 Chandigarh
11 December 2017
DIVYA AZAD
President of DAV College Committee and Arya Pradeshik Pratinidhi Sabha, New Delhi  Arya Ratna Padamshree Dr. Punam Suri today inaugurated Justice P.C. Pandit Memorial Hall at Arya Samaj Sector 7B Chandigarh . President of Arya Samaj  Ravindra Talwar said the foundation of the Arya Samaj Sector 7 B was laid down by  Mahatma Anand Swami in 1965 AD. He praised Padmashree Dr. Poonam Suri for her leadership which has been created in Arya Samajs and DAV educational institutions. He thanked the Principals of DAV educational institutions of Punjab, Haryana, Himachal Pradesh and Chandigarh and  members of arya samajs for  attending the program.
Principal K.S. Arya said that under the guidance of Justice PC Pandit, the DAV institutions of Chandigarh and Arya Samaj  got a new direction. He praised Justice Prem Chand, saying that he was idealistic and truthful. Pandit Ji did not hesitate to say the truth. While appreciating the efforts of Ravinder Talwar, President of Arya Samaj, he said  due to his hard work a big Hall  of Arya Samaj Sector 7B has been inaugurated today.
Arya Ratna Padmashree Dr. Poonam Suri congratulated to the  all office bearers of Arya Samaj sector 7 B on the inauguration of the Justice PC Pandit Memorial Hall. He said, this is a true tribute to the name of this building in the memory of Justice PC Pandit. He inspired the people to become like the Sun. The sun shines. He makes his work daily. All other planets shine with sunlight only. The sun does not need the light of others. Therefore, to create its own shine, it will peep inside. He said that we do everything for the health of the body but do not make any effort for our soul. He said that money goes to someone else after death. Body is only up to cremation ground. Relatives remember for a while, while the soul always accompanies. He said that instead of keeping soul happy, there is Arya Samaj. He said that his work should be done with passion. While highlighting the vital role of DAV educational institutions, he said Chhattisgarh Government has entrusted 74 schools to them for dispensing  quality education. Due to floods in Bihar, there was a loss of property and livesl for which DAV educational institutions had provided three crores for the Chief Minister’s Relief Fund. In the 320 schools of Bihar, better education is being provided to the students under their management committee. He said that clean India will be only when people’s hearts are clean. Adviser of  DAV College Management Committee, HR Gandhar said that following the Vedic culture, it can be oriented towards development.