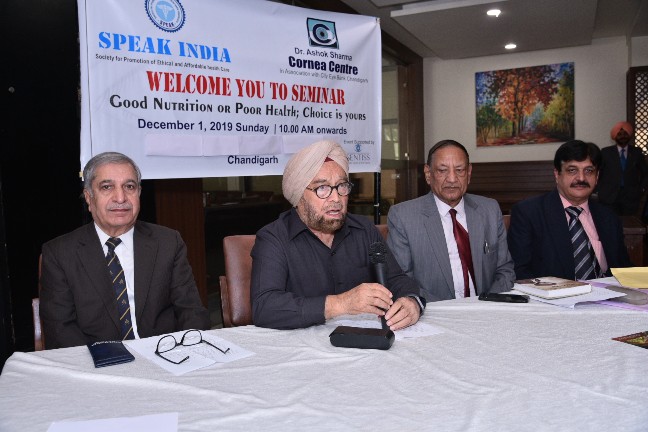 The Society for the Promotion of Ethical and Affordable Health Care (SPEAK) organized a seminar at Chandigarh Press Club, Sector 27 here under the series ‘universal health literacy for prevention of disease’.

The seminar, ‘Good Nutrition or Poor Health: Choice is Yours’ saw two interactive sessions between doctors and other experts.

Dr. R. Kumar President SPEAK India while speaking on the occasion, said, “The focus of this seminar is on the importance of good nutrition to achieve the goal of healthy India, with underlying message that most ailments can be prevented through healthy lifestyle and clean environment.”

Mr. Vikas Garg IAS, posted as RCS with Punjab Government lauded the efforts of doctors to reach the community to impart preventive health tips rather than waiting for them to fall sick and come for treatment as patients. Ajit Singh Chatha former chief Secretary Punjab and Dr. S.K. Sharma former Director PGI chaired the sessions.

Speaking in the first session Dr. Ashok Sharma from Chandigarh Cornea Centre enumerated the ill effects of poor nutrition on the eyes, especially the occurrence of corneal ulcers due Vitamin A and protein deficiency.  Dr. J.S. Thakur from PGI spoke on essentials of nutrition and genesis of malnutrition.

Dr. Atul Sachdev noted physician and former Director Principal of GMCH 32 outlined the Dance of Diseases and death due to malnutrition. He shared startling figures as per which 30 percent of women in Punjab and 22 percent men are obese. Quoting a study, he said 70 percent of Delhi population is obese, adding that 60 percent of cancers happen to obese people. He added 30 percent of world population is overweight or obese while by 2030 80 percent of people in US will be obese or overweight.

Dr. S.K. Sharma former Director PGI, while speaking on the occasion said while India is one of the emerging economies but we do not know what we are eating because of heavy contamination. Stringent measures need to be taken so that we get proper food, he said, adding government should act and bring awareness among people.

Dr. Dilpreet Sandhu a senior gynecologist, also from local medical college stressed on the prevention of diseases of women and children due to malnutrition. Dr. Preethi Pradhan, Dean Medical Sciences Chitkara university brought the importance of good governance in providing good nutrition to the community and thus saving patients from dying and hospitals from undue load of patients.

Second session saw an array of experts from different fields of life, who supplemented the principal speakers on the importance of nutrition. Dr. Sukant Gupta spoke on laws governing nutrition and role of FSSAI on their implementation. Mrs. Kamal Malhi and Dr. Manu Jatana commented on how nutrition is essential to wellness. Dr. Hemraj cautioned how bacteria invades the food chain, Dr. Vinod Chaudhry on the relation of hunger and poverty, Prof Arundeep Ahluwalia on how food security is closely related to environment, Dr. Meenakshi Uppal on the aspects of happiness and food