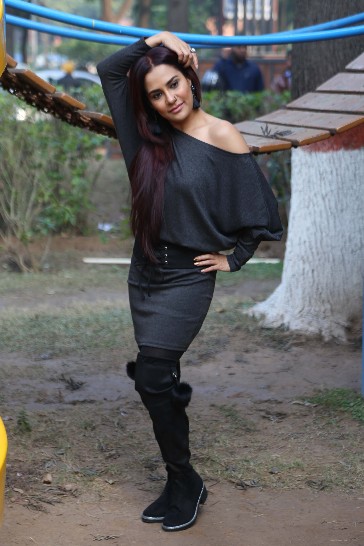 Chandigarh
21 December 2017
DIVYA AZAD
VENUS WORLDWIDE ENTERTAINMENT PVT. LTD. IN ASSOCIATION WITH  3 DOOR, PRODUCED BY CHAMPAK JAIN & VIPUL D SHAH OF 3 DOOR PROMOTED  SINGLE LIZAA MALIK’S NEW SINGLE “BABY TERA FRAUD ROMANCE” IN Chandigarh & CELEBRATED  2. 6 MILLION VIEWS ON YOUTUBE
Lizaa Malik & the entire team of Baby Tera Fraud Romance promoted their single in Chandigarh Press Club. The team received a great response & had a great time interacting with the fans.
“Baby Tera Fraud Romance” is trending as top grosser ever since the song released worldwide. Where the song retains its first position, the digital world is in a flurry post the release of the song. From the catchy lyrics to peppy tune & dance moves, the song has it all. The “Baby Tera Fraud Romance” fever has engulfed college festivals & parties. The song has turned out to be an instant sensation amongst the youth.
“Baby Tera Fraud Romance”  is released under the banner of prestigious music label Venus Worldwide Entertainment in association with 3 Door, produced by Champak Jain &  Vipul D Shah of 3 Door.
“Chandigarh was outstanding as usual. I would like to thank all my fans who have been appreciating & loving the single. Baby Tera Fraud Romance celebrates all those broken hearts. The song makes you do everything from – laugh, sing, and dance, but cry. It reflects the youth of today, who doesn’t want to cry over spilt milk” says Lizaa Malik.
Lizaa Malik in her SEXY, never-seen-before avatar will make your jaws drop! The video of the single presents a complete different avatar of Lizaa Malik flaunting her well toned body amidst stunning architectural marvels which makes “Baby Tera Fraud Romance” one of the most stylized videos in a long time. To get into the skin of the character Lizaa slogged for many hours at the gym to ensure she gets everything right.
The single directed by Colossus -Ajay Arora & Lovel Arora, Music by :Harry Anand & Produced by Champak Jain of Venus Entertainment & Vipul D Shah of 3 Door is picturized on Lizaa Malik & Manav Gohil & vocals given by Lizaa Malik & Choreographed by Savio Kunjan  & Danny, DOP- Sachin Gadankush  which revolves around a party.
“Baby Tera Fraud Romance” is an out & out dance number to recreate and outdo the magic like the previous music single had created. The single “Baby Tera Fraud Romance” opens with a fun opening verse and then launches into club mode with the party beats. When the song speeds up the tempo, it sounds very punjabi-like which enhances the danceable mood of the song. Although the song has a western touch, it is undoubtedly high on its hindi & desi feel.