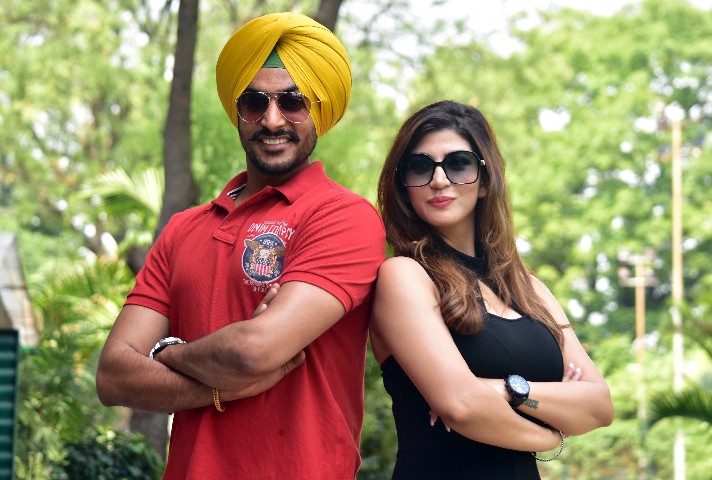 Upcoming Punjabi film ‘Jind Jaan’ is all set to make its name counted in the successfully changing era of Punjabi film industry.
Although Punjabi cinema has found its niche in different corners of the world, yet grabbing audiences’ attention depends entirely on the quality of content. Upcoming Punjabi film Jind Jaan, starring Rajvir Jawanda and Sara Sharmaa in lead roles, promises to deliver quality along with the fresh appeal of these two young actors.
Singer Rajvir Jawanda does not need any introduction today. Excited about his upcoming project, a first venture as lead actor, Rajvir is excited to be in front of camera. While talking to media during a press conference in Jalandhar, Rajveer said. “I have already acted in Simarjeet Singh’s film ‘Subedar Joginder Singh’, but ‘Jind Jaan’ is my first film as a lead role. Acting has always been a dream for me and I am lucky that singing helped me chase this dream.”
Having been produced under the banner of ‘B R S Films’ by the producers Pawan Aggarrwal, Karan Aggarwal and co-producer Dhiraj Bhandari, the film has been directed by director Darshan Bagga. He himself has written the story of the film, which is a romantic and comedy drama that will entertain the audiences with great appeal. Meanwhile, the film also stars Punjab’s veteran actors including comedian Jaswinder Bhalla, Harby Sangha and Upasana Singh, who have played a significant role in the film.
About his role, Jawanda says that in this film, he plays the role of a young man of Punjab who wants to become a singer. He sings very well and goes abroad from Punjab for a job. There he gets a job to teach music to a wealthy girl in a foreign country.
This girl is the heroine of the film. When he goes to her house to teach him music, then she learns that this girl is a very aggressive person who is very proud of her wealth and she insults everyone. When he teaches her music, her nature changes and she starts loving him. Comedians Jaswinder Bhalla, Upasana Singh and Harbi Sangha add comedy into this romantic story.
According to Rajveer Jawanda, along with the story of this film, its music is also very good, which is already liked by the audience. This movie is an important film for his film career. With this film, he will get a chance to move forward in this industry. He has worked very hard for this movie. He played the role in a natural way rather than acting in the movie. Rajvir Jawanda reveals that acting is in his blood. He has been acting since his childhood.
Film’s lead actress Sara Sharmaa is super excited to be a part of Punjabi cinema and says she is overwhelmed for having worked with the legends of Punjabi cinema such as Bhalla Ji, Upasana Ji and Harby Ji.
The film hits cinema screens on June 1, 2019.

Salman Khan unveils the first look of the upcoming biopic on...