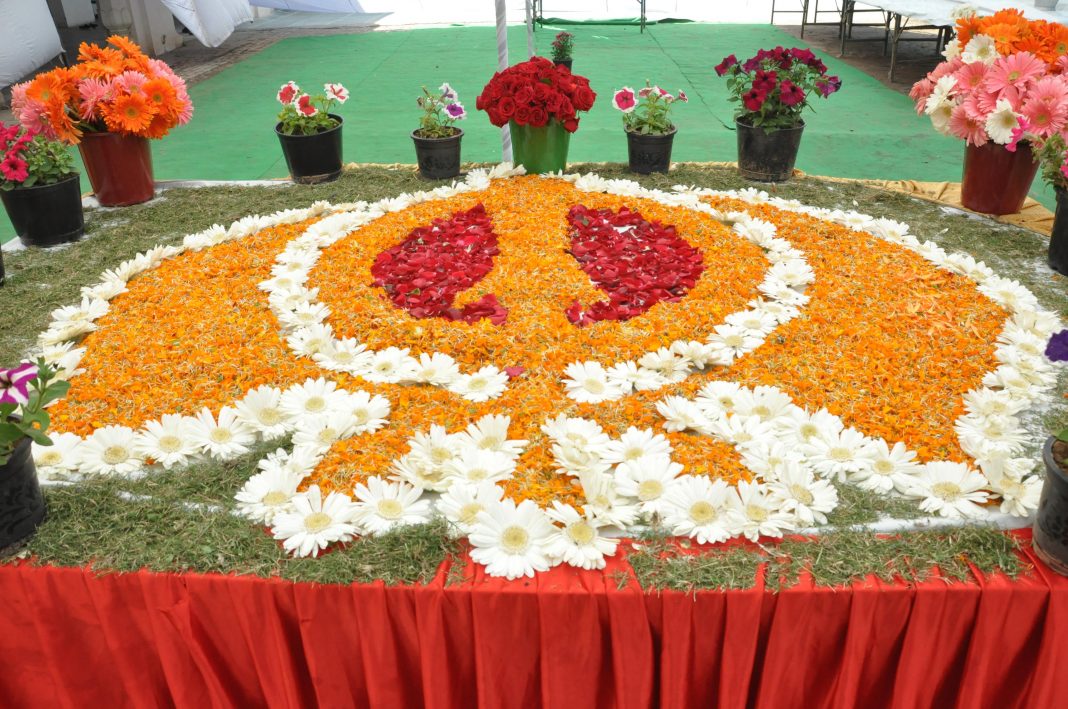 Mata Ganga Nursery kicked off  three-days’ environmental celebrations at the historical Gurdwara Nabha Sahib, Zirakpur marking the 7th World Sikh Environment Day. The celebrations included plantation drives, buta prasad, katha-kirtan on nature theme and a huge flower show at the Gurdwara. The World Sikh Environment Day is celebrated on March 14, it marks the enthronement day (gurgaddi divas) of Guru Har Rai ji and a day of environmental action for Sikhs around the world.

EcoSikh South-Asia Project Manager, Ravneet Singh said, “Guru Har Rai was enthroned in the year 1644, and he guided the Sikhs for almost seventeen years administrating his environmental conservation projects in Kiratpur Sahib, which makes him the first ever conservationist of South-Asia. He had a huge wild-life sanctuary, a herbal park (Naulakha Baag) and Ayurveda hospital where people of all religions would seek physical healing for free. Thus we strongly appeal to the SGPC to convert hundreds of acres of land in Kiratpur Sahib into a wild-life refuge in the name of Guru Har Rai.”

It is notable that Ganga Nursery was responsible for the revival of the 380 years old Naulakha Garden of Kiratpur Sahib and the Guru ka Bagh of Nabha Sahib in the past Sikh Environment Day Celebrations, under the leadership of Bhai Manjit Singh.

Said Bhai Manjit Singh, “It is a prime duty of a Sikh to maintain the historical gardens connected to the Gurus and also to connect the community with their visionary work.” He added, “Today we planted and distributed hundreds of plant saplings amongst the sangat, to promote community participation in combating the common planet threat of global warming. The flower show at the Gurdwara Nabha Sahib is organized in service of Guru Har Rai.”

EcoSikh Project Assistant, Gurpreet Kaur, who attended the Nabha Sahib celebrations stated, “EcoSikh is facilitating hundreds of Gurdwaras, educational institutions and youth groups in 14 world nations and 19 states in India to celebrate World Sikh Environment Day, and take action against climate change, through initiatives such as hosting celebrations for community awareness throughbuta prasad, plantation drives, recycling drive, religious discourses etc. It is worth mentioning that last year the Golden Temple started organic langar during the Sikh Environment Day campaigns in 2016, which sent a huge message for health and safe food across the world. This year, EcoSikh has also collaborated for clean ups in the Holla Mohalla at Anandpur Sahib.”

It is noteworthy that Washington based EcoSikh has unveiled a four-point environmental agenda for the new Government of Punjab to curb the ecological disaster of the state as part of its World Sikh Environment Day campaign.  The past seven years of EcoSikh campaigning has initiated clean and green nagarkirtans established India-wide, 3 historical gardens associated with Sikh Gurus revived in Punjab etc.