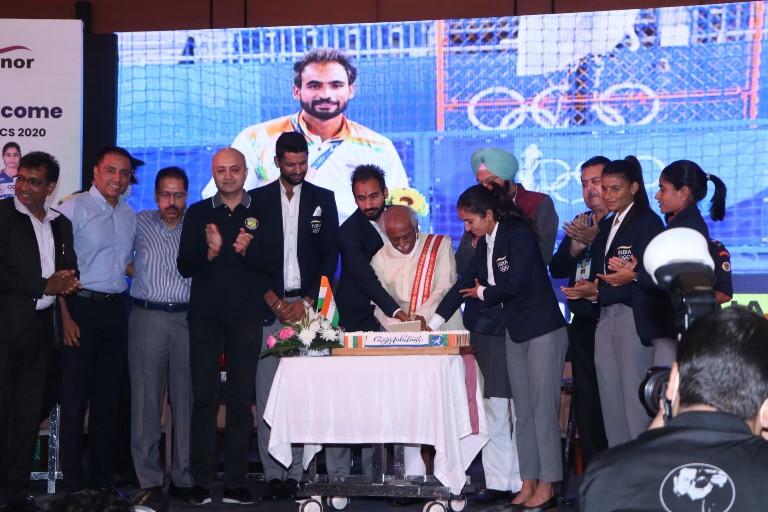 Hockey Chandigarh and Tynor on Saturday felicitated the hockey stars of Tokyo Olympics at a function organized at Hyatt Regency here. Haryana Governor, Bandaru Dattatreya, was the chief guest on the occasion while Rana Gurmit Singh Sodhi, Punjab Sports Minister was the guest of honour.

The Haryana Governor, Bandaru Dattatreya while speaking on the occasion congratulated the hockey stars present on the occasion, who had after 41 years after winning bronze brought international acclaim to Indian hockey. He added he was very happy to see that the hockey team had a lot of players from Haryana and Punjab.

The Governor said under the state sports policy, the government was awarding 6 crore to those winning gold, 4 crore to those winning silver, and 2.5 crore to bronze medal winners. He said the Haryana government had given 23.25 crore as reward to outstanding players, adding that all states should prepare a sports policy to encourage players so that they can perform even better. He said the state government was there to support the players.

The Punjab Sports Minister, Rana Gurmit Singh Sodhi, said, it was praiseworthy on part of Hockey Chandigarh to felicitate the hockey stars of Tokyo Olympics. Lauding their performance at the Tokyo Olympics, he said, it was indeed a proud moment for this region that the players had shown their excellent performance. Giving details about sprucing up facilities in Punjab, he said, while new facilities would be created in the State, the existing ones will be upgraded.

Karan Gilhotra, President, Hockey Chandigarh, who is also a known philanthropist, while speaking on the occasion said, “It was always the endeavour of Hockey Chandigarh to encourage the players and will continue to promote the sport in a big way. It was indeed a moment of pride for the country, to see our players excelling in the Olympics.”  He is heading the Karan Gilhotra Foundation which is actively engaged in the service of community.

Dr. P.J. Singh, Senior Vice President, Hockey Chandigarh and CMD Tynor, thanked the chief guest and guest of honour for their presence, which he said would go a long way in encouraging the players and coaches and assured full support to the hockey players.